From Aeon Video: “Born in the New York City punk explosion of the 1970s, the music of the influential band the Cramps was built on guttural yells, dissonant electric guitar clangs and a not-insignificant amount of LSD. While the Cramps were regulars at the iconic Manhattan venue CBGB, their most famous show was held in Napa, California alongside the San Francisco-based band the Mutants – and played, for free, to an audience of psychiatric patients at the Napa State Hospital. Featuring archival footage of the Cramps’ 1978 performance captured by the San Francisco-based production company Target Video, the short documentary We Were There to Be There recalls how the unique gig came together and generated a chaotic and joyful musical moment – for band members and audience alike. From the Cramps’ performance at the film’s centre, the US directors Mike Plante and Jason Willis craft a broader exploration of San Francisco’s explosive 1970s art scene, as well as the lasting negative impact of US government efforts to defund and privatise mental healthcare over the past several decades.” 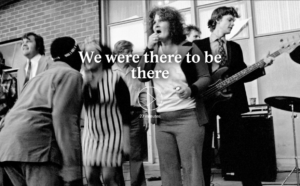