From Knowable Magazine: “As people age, chronic medical conditions, from osteoporosis to cardiovascular disease to cancer, become more common. And for medical systems across many countries, prescribing drugs is the go-to method to treat these illnesses. According to a report by the Lown Institute, a nonprofit think tank, 42 percent of all older adults in the US take five or more prescription medications a day. Almost 20 percent take 10 drugs or more, and over the past 20 years, incidences of polypharmacy have tripled across the country.

The pharmaceutical industry’s for-profit model may influence doctors to prescribe more medications, according to an investigation by the newsroom ProPublica. They reported that doctors who receive money for a specific drug prescribe that drug more often than doctors who aren’t benefiting financially. In 2015, about half of all doctors in the US accepted payments from drug companies, totaling $2.4 billion.

Another contributing factor is the disconnect between a patient’s different doctors, leading to prescribing without proper communication. Consequently, what seems to be a novel illness may in fact be the side effect of a drug . . .

Every day, 750 older adults are hospitalized due to serious side effects from their medications, including falls, allergic reactions and internal bleeding. And with each additional medication prescribed, the risk of an adverse reaction increases by 7 to 10 percent.

. . . If trends continue, it’s estimated that polypharmacy will lead to nearly 150,000 premature deaths in the US over the next decade, according to the report by the Lown Institute. It will also be responsible for at least 4.6 million hospitalizations in the US between 2020 and 2030, costing around $62 billion, the report predicted.” 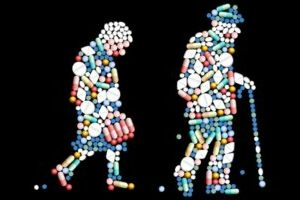