Around the Web, from Claudia M. Gold, MD:

“Carla’s bright flamboyance stood in stark contrast to her quiet 3-month-old infant, who lay on a blanket on the floor, his eyes transfixed by the light in the ceiling. ‘I think he’s autistic’ had been her opening words when she called to make an appointment in my behavioral pediatrics practice. We sat beside him on the floor. With her bright flowered dress and bangling necklaces matching her high lilting voice, she leaned into her son’s face, with increasingly urgent efforts to engage him. ‘Theo it’s Mommy!’ Theo remained unfazed, not shifting his gaze from the spot on the ceiling. He seemed to confirm her concerns.

As I felt my anxiety rising to meet hers, I took a slow deliberate breath to calm myself. I thought, ‘we don’t know but let’s find out.’ ‘Tell me about him from the beginning.’ I asked. She shared the story of this ‘surprise’ third boy, so different in every way from her loud, outgoing 5- and 7-year-old sons.

As she turned her gaze and attention to our adult conversation her voice came down in both pitch and volume. I continued to watch Theo in my peripheral vision. When I spoke in a tone a notch softer than hers, I noticed Theo’s mouth begin to move. At first, I thought I had imagined it. Once I felt certain of the shift, I called her attention to my observation. She held her face at a distance from her son, keeping her posture as she had in conversation with me but tilting her head to speak to him. She used the same conversational tone as she had in our adult exchange. We both observed a remarkable transformation. Theo’s whole face came to life as he moved his mouth in imitation of his mother’s. Her body relaxed; her face an expression of pure joy. Theo responded in kind with a broad smile. Theo showed us through his behavior that, likely different from his older brothers at birth, he preferred a less intense, quieter type of interaction. With a busy and often chaotic household, mom felt overwhelmed. In this quiet space with room for curiosity and time to take notice, she was rewarded with an unexpected answer and a powerful moment of connection with her son.

I thought of this story when I read a recent long Twitter thread by developmental psychologist Suzanne Zeedyk in response to the newly published study of an intervention for infants with early signs of autism. In one tweet she wrote: ‘What if we helped parents to feel more confident in responding to their baby. What if we helped them see & make sense of all the tiny behavioral cues that say “that’s too much for me,” “that’s overwhelming,” “can you slow down,” “oh that is brilliant! so comfortable!”’ She suggests that these findings have broad implications beyond the question of a ‘diagnosis of autism,’ citing as an example similar support for parents of blind babies. She concludes, ‘I think everyone deserves to know how powerfully attuned communication shapes babies’ brains & bodies. This autism research is telling us that 6 short months of communicative help for parents is having noticeable impacts on infant development. Attunement decreases stress.’ Every baby deserves that. Every baby deserves a less-stressed world. The world we make babies grow up in is tough. No parent intends that. But it just is. Loud noises, fast pace, bodily disconnection in car seats, parents distracted by phones. Babies’ brains notice *everything*.

. . . While this study is specifically about autism, it has relevance for any parent-infant pair that is having trouble trying to connect. This difficulty may stem from issues in the parent, as with postpartum depression, the child, as when her signals are difficult to read, or both.” 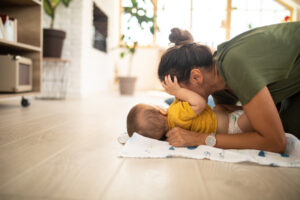 The Healing Power Of Emotion Coaching