From The Daily Mail: “John Read, a professor of clinical psychology at the University of East London, who led the study, argues that providing the treatment without consent is equivalent to ‘people being given ECT against their will’.

. . . Commenting on the research, Dr Lucy Johnstone, an independent consultant clinical psychologist, says that receiving ECT without consent can significantly worsen patients’ mental conditions. ‘ECT is very scary,’ she says. ‘My research into the treatment’s psychological impact, in the Journal of Mental Health in 1999, shows that it can be very re-traumatising to undergo it without consent.

‘Many of the patients given it for severe depression have previously suffered trauma through sexual abuse and violence,’ she told Good Health. ‘To be laid down on a table out of your control is re-traumatising.’

. . . half of all the NHS mental health trusts that replied to Professor Read’s FoI requests said they could not readily supply information on how many patients had received ECT without giving consent. (Extrapolating from such figures led to the study’s conclusion that more than a third of ECT patients do not give their consent to it.)

‘This suggests that many trusts still do not consider this issue important enough to even monitor,’ says Professor Read.

He adds that the only external monitoring is performed by the ECT Accreditation Service (ECTAS), which is run by the Royal College of Psychiatrists. ‘But ECTAS also fails to monitor this issue in its surveys — and has no benchmark or target in its accreditation standards for clinics that administer ECT,’ he adds.

ECT is a potentially dangerous procedure, he says, and ‘requires the most stringent monitoring’. ‘Our study shows that this is not the case at most ECT clinics in England. Monitoring should be transferred to an organisation that is independent.’

Regardless of one’s opinion of ECT — as either barbarically useless or effective in severe clinical cases — it surely seems right that information on patients’ consent and professionals’ decision-making should be clearly and readily available. It would at least take one controversy out of this most controversial of treatments.

A spokesman for the Royal College of Psychiatrists did not provide a comment.” 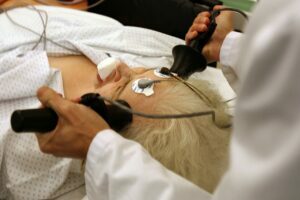