From The New Yorker: In “Mama,” an emotive short film by Pablo de la Chica, a caregiver named Mama Zawadi at a chimpanzee sanctuary in the Democratic Republic of the Congo and the orphaned chimps she cares for—both victims of the ongoing conflict there—help each other heal after the profound traumas they have suffered.

“So, it was not a matter of going to therapy—it is that there is no better therapy than love, and the bond of love is the key to everything.” ~ Lorena Aguirre Cadarso, psychologist and program director

“On arrival, Kalima [one of the baby chimps] didn’t laugh—she was very furious. But, two months after her arrival, she started laughing and playing. She loves to play. But it’s not a bad thing; it’s good to play. Because, if you’re unwell, you can’t play. You can’t play if you’re traumatized, and you can’t smile, either. And I started to say to myself, No. These chimps are victims like me. They need love so that they can forget what they’ve been through, like me. I’m in the process of letting go, of forgetting.” ~ Mama Zawadi 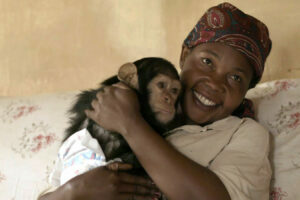