On a sunny afternoon this past Saturday, on an expanse of grass behind the White House, a gathering of perhaps 20 people was barely noticeable, save for a passel of bright-pink posters and a spangly cardboard cutout of the “Princess of Pop.” But their passion was palpable. Holding signs and banners blaring “Free Britney!” members and supporters of Free Britney America (FBA), a local grassroots group, were staging their third demonstration so far this year in Washington, DC. They were advocating for Britney Spears’ right to be released from her 13-year conservatorship, as the singer requested in court testimony last summer.

The protesters carried other signs as well, speaking to issues beyond Britney: “We want federal oversight.” “We want a bipartisan bill.” Indeed, over the next two hours, their chants included “Free Peter! “Free Amanda!” “Free Lizzie!” and “Free Poochie!” They had assembled to call for federal oversight to protect the civil rights of individuals under guardianship and to speak on behalf of some of the estimated 1.3 million individuals they say are trapped in these arrangements. 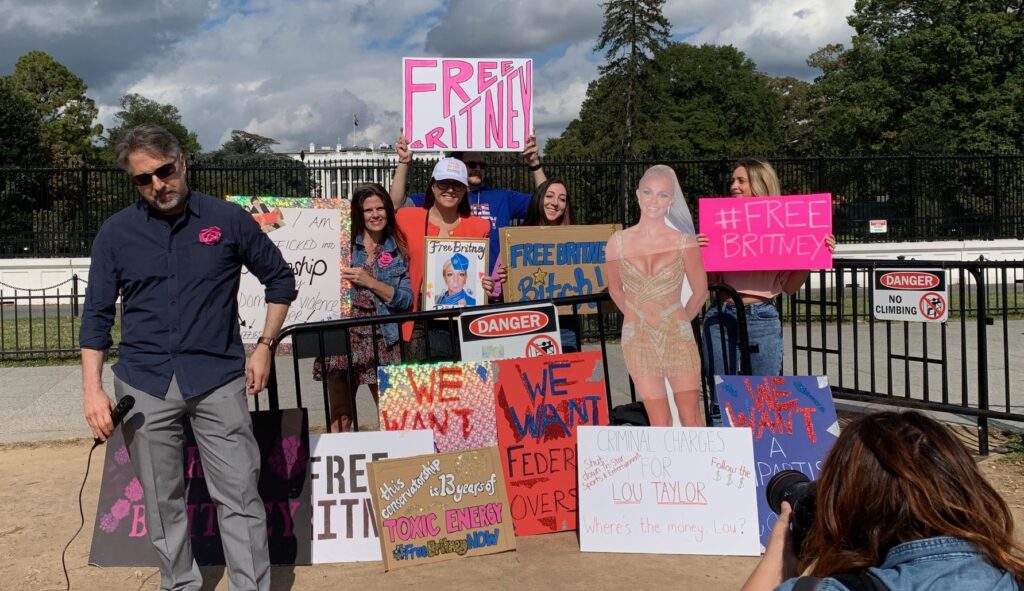 In a guardianship (called a conservatorship in California), a court appoints a family member or even a stranger to oversee the affairs of a person deemed physically and/or mentally incompetent. This often leaves them with no choice about where they live, who they see, and how their money is spent.

A Role for Politics

Britney Spears, Dumas told rallygoers, “has been stripped of all of her rights, but again, she is not the only one. We have an opportunity to instill a system of checks and balances at the probate courts and reform the state laws that are frankly not working today to ensure that people are not put into the system.” She urged them to support the FREE Act as a first step.

The Act, whose acronym stands for Freedom and Right to Emancipate from Exploitation, is a bipartisan bill introduced by Reps. Charlie Christ (D-FL) and Nancy Mace (R-SC) in July. It would give Americans the right to replace their guardian with a person of their choice and to be assigned an independent caseworker to monitor for signs of abuse or neglect. It would also require disclosure of financial conflicts of interest, and that states more closely monitor guardianships. FBA seeks to expand the bill to include criminal charges for offenders.

Dumas also read a letter from Libra Max, daughter of ‘60s pop artist Peter Max, 84, who has dementia but still lives in his own New York City apartment. He has been under guardianship since late 2016. Libra has been trying unsuccessfully to end the arrangement, accusing his guardians of isolating her father from his family and friends, draining his multimillion-dollar fortune via bills for services, and taking away his pets, among other charges.

“I am so grateful for what you guys have started,” wrote Max. “Before the #freeBritney movement, no one could have believed that such a horrific constitutional and human rights violation could happen in America. Your voices have raised awareness and the truth can no longer be hidden.”

“So much has happened in a few weeks,” said another speaker, disability rights lawyer Jonathan Martinis, “including the first congressional hearings in 40 years.” He was referring to a September 28 Judiciary Committee hearing on guardianship reform led by Sen. Richard Blumenthal (D-CT). Martinis, Senior Director for Law and Policy at Syracuse University’s Burton Blatt Institute (and an attorney for Libra Max) told activists, “You’re not done…if you don’t want to lose your rights or a loved one’s, talk to your representative…If Britney Spears had committed murder with an ax 13 years ago, she could have chosen her own attorney.” He also advocated a Bill of Rights for people with disabilities and those under guardianship, adding, “#FreeThePeople!”

Other speakers echoed the calls not just for an expanded Bill of Rights but also for greater accountability within the judicial system. Elizabeth “Lizzie” Weinstein, who carried a sign reading “I am trafficked into guardianship by my domestic violence abuser,” said her constitutional rights were violated when a judge ruled her mentally incapacitated and a court took control of her finances after her husband allegedly seized her money. “The judiciary has unchecked power,” she said, referring to both herself and Britney. “The spotlight needs to be on the fact that we have judicial immunity in this country.”

Another speaker, Amira Saudi, urged onlookers to publicize another celebrity conservatorship case: that of former child actor Amanda Bynes. Bynes’ mother placed her under personal and financial conservatorship in 2014 amid Amanda’s mental health and substance-use struggles. Though Bynes has regained control of her money, she reportedly wants to end the arrangement altogether.

The protesters also heard from people whose parents were in other types of restrictive arrangements. Brenda Lefevre shared the story of her healthy 95-year-old mother, Poochie, who needs some assistance but can still “beat us all at Scrabble.” She stated that siblings placed Poochie in an unsafe nursing home in Maryland and gave the woman’s power of attorney to strangers who won’t let her leave.

“We’re just trying to give her the best life that she deserves, but are unable to do so,” Brenda’s husband, Doug Lefevre, told Mad in America.

Looking to the Future

Will Saturday’s tiny rally propel a larger guardianship reform movement beyond the assembled group of already committed activists? Some of those in attendance seemed to think so.

Britney fan Corey Bailey, who also attended the July DC rally, told a reporter, “I really, really think [Britney’s] been in the conservatorship for way too long, she’s made a lot of money for a lot of people, and has been abused throughout this process,” adding, “I think it’s been really awesome that Britney has put a spotlight on what is happening with so many other people in this country.”

Doctoral student and intersectional feminist Melanie Carlson, her hair colored a Britney-flag pink, carried a sign reading, “Conservatorship abuse is a LGBTQ issue.” According to her Twitter profile, “The #freeBritney movement directly relates to my dissertation research… to learn how to identify empowering practices over perpetuating paternalism!”

In any case, given that there were nearly as many reporters attending as participants that day, the issue is certainly seen as newsworthy.

Spears’ next court hearing is scheduled for November 12 in Los Angeles. Fans and advocates, including lawyer Martinis, believe there is a “95 percent chance” Judge Brenda Penny will “free” her that day. According to an announcement from Disability Voices United, they and #FreeBritney LA organizers are lining up mental health and disability rights organizations to speak and distribute literature about systemic problems with conservatorships there.

Whatever happens, the current media spotlight on Spears’ case offers “an opportunity to elevate the conversation,” Dumas, a lifelong Spears fan with a degree in criminal justice, told Mad in America. “And to ensure that this brings the biggest amount of change for the most amount of people.”

The Sins of Conservatorship: Why Britney Spears Compared It to Slavery

Speak Out! Britney’s Fight Is Our Fight