From Gabor Maté, MD: “Our capacity to pay attention and to learn have a lot to do with what’s happening internally on the visceral and emotional level and what our gut feelings are telling us. And so in a society where people are less and less connected to their gut feelings, there’s less and less engagement with the realities of the external world. Even though we’re externally focused, we’re externally focused in a less efficient manner, because of that disconnect.

. . . In other words, there’s something about gut-level cognition that is absolutely valid and we ignore it at our peril. But that’s a function of living in a society that actually cuts us off from our gut feelings. So there’s something internal that knows, that is much stronger than what intellect is telling us. And in any contest between the internal knowledge and the intellectual knowledge, 99 percent of the time, that internal knowing will be accurate, and the intellectual rationalization will be inaccurate.

. . . My profession is really good at creating new diagnoses. So every time a new DSM comes out there’s a whole bunch of new diagnosis in it with which you can label people now. So I’ll give you one example. A common one is ADHD these days. In the United States, according to latest figures, there at least 3 million kids receiving stimulant medications for ADHD. In Canada the number of prescriptions for stimulant medications has gone up 43 percent in the last five years. Let alone the hundreds of thousands of kids who are receiving antipsychotic medications, not to control psychosis, which they don’t have, but to control what? To control their behaviors. And we don’t even know what the long-term effects are of antipsychotics on any developing human brain, but the early indications are nothing positive.

So what we’ve got is a massive social experiment in the chemical control of children’s brains, because we don’t know what else to do. And so when children don’t learn or behave the way we expect them to, we have two dominant responses. The one response is to medicalize it. ‘Let’s call it a medical name and let’s medicate it’ . . . And then there’s the behavioral approach, which says ‘What’s wrong here is the behavior itself. So let’s fix and control the behavior.’ And that dominates psychology these days, behavioral approaches. So when a child is acting out, ‘Let’s control the behavior.’ And parenting books will tell you, ‘When the kid is doing this, the parent should do that’ . . . But here’s the thing about acting out. Look at the phrase itself . . . We act out when we don’t have the language to say something in words. That’s what acting out actually means. So in a game of charades, where you’re not allowed to speak, you have to act out to deliver your message. If you land in a country where nobody spoke your language, and you have to portray hunger, you have to act it out. Kids are acting out all the time. And our response is to control the behavior. We respond to the form of the message, rather than the content of it. And then we wonder why it doesn’t work.

. . . There’s many kids who are having behavior problems, impulse regulation problems, body regulation problems, emotional outbursts, difficulties learning – this is burgeoning in our society. But the question is why. Is it because some genetic disease is somehow mysteriously spreading in the population? Or something is happening in children’s lives that is undermining their capacity to socially interact well? To pay heed, to pay attention, to be emotionally regulated, to have impulse regulation, to be able to regulate their stresses?

. . . . What we’re actually coming down to in our society, and the reason that so many children are having so many problems is for no other cause than that the parenting environment has become so stressed, so that parents are no longer able to provide their children with the environment that these functions and the prefrontal circuits that serve these functions can develop properly. That’s why the epidemic.

. . . Tuning out is not a disease. On the contrary. What actually is tuning out? Why did nature give us the capacity to tune out, to dissociate? It’s a survival mechanism. If I were to stress you right now, by threatening you, or just insulting you, insulting your dignity as a human being, you’d have three healthy options. One would be to walk out. Escape. Flight. The other would be to fight. To challenge me. Stand up for yourself. And, if for whatever reason you’re unable to engage in either of those modalities, you have a third one, there are about a hundred people in this room, you could seek help. But if none of those were available to you and the stress was immense and intense, what your mind would do, what your brain would do, is escape from that and one of the ways of escaping would be to dissociate, to tune out. So tuning out is not a disease, it’s a nature-given capacity that we have to escape overwhelming stress.” 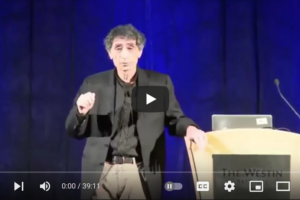