From YES! Magazine: “When nurse Liz Evans began taking troubled tenants into the Portland Hotel in 1991, she didn’t have any grand strategy in mind. She certainly wasn’t conscious of the changes in social policies that her work at the hotel would gradually initiate in Vancouver. She was simply trying to be kind. But, at the Portland Hotel, a fascinating set of unintended consequences soon became evident. Evans found that when she told tenants they no longer needed to fear eviction—that they would not be thrown out to the streets for using drugs or disrupting others with symptoms of mental illness—her tenants often used less drugs and experienced fewer mental health outbursts. When she gave tenants a home that was truly theirs and removed the intense feelings of stress that they had previously felt from the constant threat of homelessness, their mental health improved, sometimes significantly so.

. . . Everyone who lived at the Portland was severely addicted to drugs or alcohol. Evans estimates that 95 percent were injection users. ‘They were treating themselves badly and treating each other badly because they didn’t feel like their lives were worth much,’ she says. ‘I was getting to know people and listening to their stories. And always the common denominator was, “My life is worth shit, and I don’t matter.” That was the piece that really made me think about my mum and think, “Well, fuck, these are just people in the world who don’t feel like their lives have a right to occupy space.”‘

While she was never abused, Evans saw her own life in the lives of her tenants. ‘I had grown up with a mentally ill mother. I never had thought of her as sick; I just thought she was a really nice person who was broken and sad,’ she explains. ‘And so I just saw [the Portland tenants] as broken and sad. These people are lovely, but they don’t fit. For whatever reason, there is no space for them. They don’t fit anywhere in the world, and the world, to them, feels like a very unwelcoming place.’ Inside the Portland, she worked to create a sanctuary.” 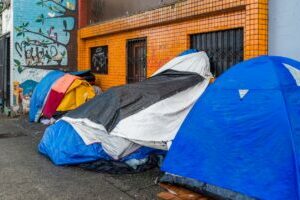