From the International Association Against Psychiatric Assault: “The two Germany-wide ‘user’ and survivor organizations, the BPE and die-BPE, have launched a joint campaign in German and English as part of a three-step strategy explained below:

Part A) is based on the PatVerfü, a special Psychiatric Advance Directive PAD supported by German law. This gained jus cogens status last summer in the German Supreme Court.

The second stage is described in part B) below.

The campaign now launched at Change.org is the preparation of the third stage C), where the goal of our efforts shall be achieved: a violence-free psychiatry by abolishing all special psychiatric laws. This campaign is intended to make known the horizon of our demands and to demonstrate to psychiatry that we will not be satisfied with anything less. It should bring international support and solidarity in order to make a breakthrough in succeeding in Germany for the first time in the western world by abolishing coercive psychiatry through special psychiatric laws. Therefore we request you to click on the petition, to sign it and to reject or skip all other petitions and donation possibilities offered for signature afterwards, if one does not want to support any of them. Don’t be irritated by the prompts after clicking the signature box, but click through to the end of the course, then confirm your email address in the email from Change.org. It would also be very good if you would snowball the link to the campaign https://chng.it/2cDYjvQtwT in your own email address lists.

Prof. Wolf-Dieter Narr coined the phrase in his speech in 1998 at the Foucault Tribunal with regard to the state of psychiatry: The rock on which all consensus categorically breaks bears the name of coercion. So if in the Landschaftstrialog (Landscape Trialogue) the goal of a non-violent psychiatry is presumed to be a never-ending struggle, then the towel has already been thrown in, that is demoralizing defeatism or one can also say an Uncle Tom attitude. But nothing could be more wrong than that. In fact, coercive psychiatry is eroding at a furious pace.

A) The first stage of the approaching end of legalized coercive psychiatric treatment is marked by:

a) this year’s recognition by the German Federal Constitutional Court (BVerfG) that even in forensics(!) a timely documented and thus effective PatVerfü legally prevents psychiatric coercive treatment (if necessary, be prepared to defend it, in the end you win and the state has to foot the bill). The PatVerfü issued by the ‘BPE’ and ‘die-BPE’ together with others has been granted the status of jus cogens by the BVerfG, see: Commentary on the successful complaint at the supreme court in Germany (zwangspsychiatrie.de)

The logically compelling reason that psychiatric coercive treatment of the PatVerfü-protected persons would violate the jus cogens of the prohibition of torture, could not escape the BVerfG after 5 years of consideration and can be read in detail here.

Thus we have won a first stage victory: If in the future those who neither consider mental illness to be provable, nor believe in it, nor are convinced of its existence, are declared to be incapable of giving consent and are coerced with psychiatric measures of forced insight into their illness, this is a violation of the prohibition of torture recognized as jus cogens, it is coercion to confess, as in a terrorist state. The fact that there is no such thing as ‘mental illness’ was pointed out at about the same time in 1961 by both Thomas Szasz in his work The Myth of Mental Illness and Michel Foucault in Madness and Civilization, and all those who sign a PatVerfü confirm this with their signature.

b) The psychiatric professional society is on the run, breaking away from an essential part of the hitherto so hermetic racket. As we have learned from a member of the cartel against § 63of the German Criminal Code (‘Strafgesetzbuch – StGB’), the social psychiatry organized in the German Society for Social Psychiatry (DGSP) is strongly committed to the dissolution of forensics and demands the deletion of §§ 20, 21, 63 and 64 from the StGB.

B) Thus, a victory can, indeed must, now be achieved in the second stage:
Only with a positive advance directive may all adults, including those who consider the existence of mental illness likely, believe in it, i.e. are convinced of its existence, still be compulsorily treated at all, a template for printing, see e.g. http://www.psychiatrie-erfahren.de/positivestestament.htm.

In 2015, the State Secretary Schmachtenberg of the Ministry of Labor still tried to deny that there is a torture concept in the Federal Republic of Germany, when he had to answer follow-up questions from the UN CRPD Committee. This is recorded in a video here. Sado-masochistic sexual practices, which would otherwise be understood as painful torture, must be justified by consent, preferably documented in writing beforehand, as a self-evident right of an adult to his own body without further legal regulation. They do not break the will of the persons concerned, but fulfill it.

This right to one’s own body is self-evident as a previously documented justification for medical treatment as so-called ‘informed consent’ and must also be respected as a matter of course in all psychiatric coercive measures, which are even not only threatened but are to be carried out with the use of force. However, it must now finally be guaranteed by the abolition of all legal possibilities to carry out psychiatric measures without the explicit consent.

On the other hand, it was the calculation of the Groko government (Grand Coalition), which in 2008 set up the fraud with the UN CRPD and, in addition, with the approval of all Bundestag parties, falsified the associated memorandum for the ratification of the UN CRPD by slipping in a word into the UN CRPD with a light hand to defend coercive psychiatry come hell or high water. The next three federal governments also continued to try to sell coercion and violence in psychiatry as untouchable by trying to dominate the discourse on the UN CRPD. For this the Secretary of State Schmachtenberg, as willing executor of the ‘Landscape Dialogue’, promoted the so-called ‘Basement Children’, i.e. paid them.

They should take over the role that in the defense of the compulsory psychiatry it always could be asserted that concerns were nevertheless heard but unfortunately they are too many voices and their voice is too weak to become generally accepted.

The harbinger of the Federal Government, namely the ‘basement children’ sponsored by Secretary of State Schmachtenberg, may have unsuspectingly fallen for these means for a supposedly ‘open discourse’, but that does not exonerate them in any way, because evil can certainly be done even with good intentions. Helping the rulers to get the alibi that those affected were involved in order to check off the point ‘nothing about us without us’ is reprehensible. At the same time, the coercive measures of psychiatry are about highly personal, human rights freedoms, which are inalienable, and in particular may not be surrendered for coercive acts, which are carried out on the call and opinion of doctors, then confirmed by courts. Those who are conscious must have given their prior consent to medical treatment; coercion must be strictly prohibited, especially in this area, just as physicians may under no circumstances offer their hands in executions or killing on demand.

In the meantime, the newly elected 4th Federal Government after 2008 is not only trying to defend coercive psychiatry and its profiteers, but has now even written a further tightening into the coalition agreement according to its motto ‘dare more regression’, by which the psychiatric coercive and violent system is to be knitted even more tightly and in addition the psychiatric ‘emergency and crisis care’ is to be expanded nationwide. With all these maneuvers, a success of our efforts for a non-violent psychiatry is to be thwarted with the alibi of alleged ‘reducing’ and ‘diminishing’ it, as if making a Coitus Interruptus as a contraceptive.

C) The third stage, that then also the forced incarceration becomes untenable and there may only be a non-violent psychiatry according to the  Martin Zinkler’s concept, is logically pre-drawn, and this was stated by the current president of the DGPPN, Prof. Thomas Pollmächer 2019 in Forensic Psychiatry, Psychology, Criminonlogy 13, 4-12in the article: Zur Legitimität fremdnützigen Handeln in der Medizin und speziell in der Psychiatrie published. A quotation may suffice as evidence:

… ‘In summary, the extraneously useful placement of people with mental illnesses in psychiatric hospitals against their will seems problematic, if not illegitimate, if a treatment cannot be carried out there. In this context, it is irrelevant whether the free, predisposed or presumed will of the person concerned makes treatment impossible, or whether treatment options do not exist at all.’…

Just as recently, after the judgment of the BGH, not even bank account fees may be increased without explicit agreement, thus then, and only then, where persons with a compulsory hospitalization, of which a positive advance directive e.g. according to www.psychiatrie-erfahren.de/positivestestament.htm was signed beforehand and which is presented to the hospital. Only through the short-term implementation of this logical conclusion in the daily practice of a non-violent psychiatry can it make itself ‘morally innocent’, so to speak, for the future and become compliant with human rights, as they are spelled out in the Convention on the Rights of Persons with Disabilities.” 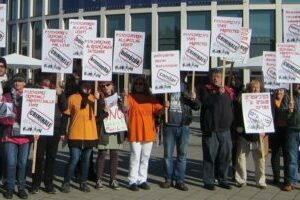