Back in 2008, Erick Turner and colleagues raised eyebrows when they published a study of 74 clinical trials of antidepressant drugs and found that the scientific literature gave only a limited – and highly distorted – picture of what really happened during those trials.

The 2008 study became an instant classic of its genre and has since been cited over 1,400 times.

BACK TO THE FUTURE

Now Erick Turner has returned to his old hunting grounds with a fresh team to check whether things have improved over the past decade.

The image below shows what he found. 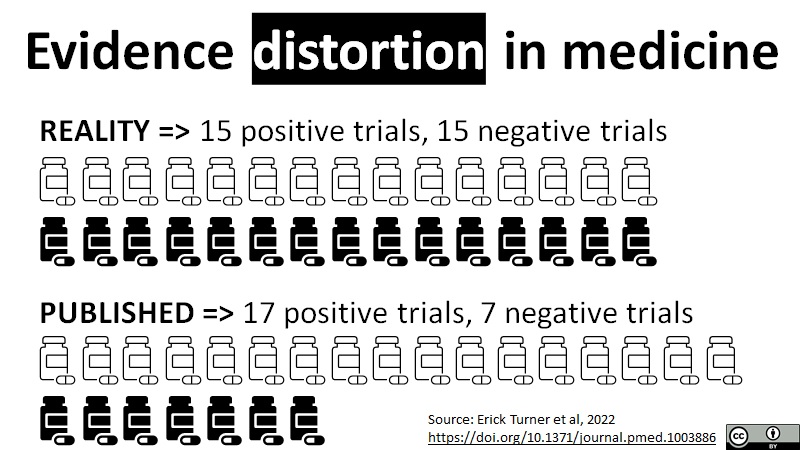 The scientific literature – the place where doctors look for guidance on how well drugs work – presented a rather different picture: 17 ‘positive’ trials versus only 7 ‘negative’ trials (bottom row).

The team’s verdict: The medical evidence base is still being systematically distorted, albeit to a lesser degree than a decade ago.

WHO IS PROTECTING PATIENTS?

This problem is not limited to antidepressants. It has been exhaustively documented in countless studies cutting across many areas of medicine.

Congress tried to create a more reliable evidence base in 2007, when it passed a law requiring many (but by far not all) clinical trials to disclose their results in a public registry, ClinicalTrials.gov.

Under the FDA Amendments Act, pharma companies, universities and hospitals running clinical trials have to upload all applicable results onto the registry using a standardised format that leaves little space for creative accounting.

By law, companies and institutions that fail to disclose such trial results must pay a fine of over $10,000 per missing result per day.

However, over 3,000 trial results are still missing from the registry today, and the FDA has yet to impose a single fine. So far, all it has done is send out a few warning letters – at a snail’s pace.

A CRY FOR HELP

This is a problem that could easily be solved. The solution is simple: The FDA must start enforcing the law.

However, despite its budget of six billion dollars a year, the FDA is apparently unable to send out more than a couple of warning notices per week.

As a result, companies and institutions across America continue to break the law with impunity, leaving doctors flying blind and patients unable to make informed treatment choices.

Back in 2007, Congress passed the FDA Amendments Act with overwhelming bipartisan support and congratulated itself on fixing the problem. Today, Congress is presumably unaware that the FDA is still refusing to take action.

If I was American, I would contact my member of Congress and ask him or her to write to the FDA and tell it to finally start enforcing the law.

But I am not American. If you are American, maybe you should consider sending that email right now, because if you don’t, chances are nobody else will do it for you.