From The Boston Globe: “As recently as last month, when [Massachussetts governor Charlie] Baker delivered his State of the Commonwealth address, he credited his administration for having ‘brought care and compassion to Bridgewater State Hospital after decades of national embarrassment.’

But a report issued last week by the Disability Law Center, which has a role in monitoring Bridgewater as part of the settlement of [a 2014 class action] lawsuit, paints a far less rosy picture of life today at the facility. The report describes a facility whose buildings are plagued with ‘harmful levels of mold growth’ and where clinical practices include ‘illegal chemical and physical restraint and seclusion practices’ and ‘a pervasive culture of punishment and intimidation.’

The use of physical restraints that led to that 2014 lawsuit has largely given way to what the Disability Law Center considers the too frequent use of injections of Benadryl (to induce drowsiness), Ativan (also used to treat anxiety and insomnia), and Haldol (an antipsychotic), often in combination, or Benadryl and the antipsychotic Zyprexa, and often administered by staff ‘using a manual hold.’

The report found ‘nursing notes, restraint and seclusion orders, and clinical records demonstrate’ that such drugs administered on a supposedly emergency basis ‘were widely used to control behaviors that do not justify chemical restraint, i.e., where no imminent threat of serious harm to self or others existed.’

. . . Some of the men being held at Bridgewater reported to Law Center investigators that at times ‘therapeutic safety technicians’ entered their rooms dressed in ‘black tactical gear and helmets’ and carrying shields in order to administer the medications.” 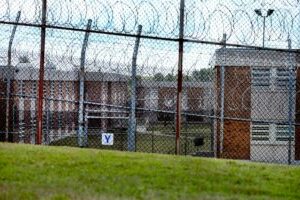