From The 19th: “Executions of women are rare in the United States — 17 in the last half-century, compared with more than 1,500 men — but they tend to get outsized public attention and stir up debates on a variety of larger issues. Lucio’s case has been of particular interest to psychiatric and forensic experts, because it may demonstrate a phenomenon they’re just starting to understand. Survivors of trauma, they believe, are especially prone to taking the blame for tragedies they had nothing to do with.

‘Anyone is going to feel stressed in the interrogation room, but for someone with PTSD it’s ramped up to 1,000,’ said Lucy Guarnera, a psychiatry professor at the University of Virginia who studies false confessions. ‘A woman who has experienced domestic violence is now trapped in a room with men who are intimidating.’

. . . When Megan Crane, a St. Louis-based lawyer with the MacArthur Justice Center, a civil rights organization, began noticing that her teenage clients may have falsely confessed after experiencing trauma, she looked for research to cite in her court arguments, and couldn’t find much. ‘It’s obvious the intersection exists, but it’s a vacuum,’ she said.

So she teamed up with Guarnera, as well as Virginia Commonwealth University criminal justice professor Hayley Cleary and and University of Virginia Medical School psychiatry professor Jeffrey Aaron to look at trauma among adolescents who had confessed to crimes. Around this time, lawmakers began trying to protect youth from aggressive questioning, motivated by high-profile cases like the Central Park Five and Brendan Dassey, the teenager whose confession to rape and murder was examined by the Netflix series ‘Making a Murderer.’ Last year, Illinois and Oregon banned detectives from lying to suspects under 18, although it’s still legal to do so in the other 48 states.

For decades, psychologists have sought to understand why people falsely confess to crimes. (The National Registry of Exonerations has tracked more than 350 cases of false confessions since the 1980s.) They’ve come to blame the dominant style of American police interrogations, with its focus on lies (‘We already know it’s you.’), minimizing language (‘Maybe this was an accident.’) and ratcheting up the stakes (‘They’ll fucking give you the needle.’).

Researchers say the risk of a false confession applies not only to traumatized kids, but also to adult victims of domestic violence . . .

Whether or not Lucio is executed, her case will remain a focus for researchers trying to understand why some people are especially vulnerable in the interrogation room, and how they can be better protected. State lawmakers in New York are considering a ban on deceiving suspects. ‘Avoidance is one of the key trauma symptoms,’ said Guarnera, the researcher. ‘In regular life that means not going where strange men are, not going to watch movies with violence. But in the interrogation room, it means getting out of the room by any means necessary — and the only way out is confession.'” 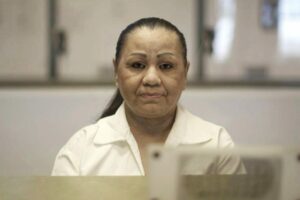