From Psychology Today: “In the latest issue of Science of the Total Environment, five colleagues in toxicology and chemistry at Mexico’s Universidad Autónoma de Estado de México, led by professor Nidya Diaz-Camal, compare prescribing rates for SSRI antidepressants both before and during the COVID-19 pandemic and conclude that ‘worldwide consumption of antidepressants increased significantly during the pandemic.’ As a result of that rise, ‘concentrations of SSRIs in the environment increased’ as well.

Studies of Organisation for Economic Co-operation and Development countries in Europe report smaller but still substantial percentage increases over a similar period, with the consumption of antidepressants found to double between the years 2000 and 2019, ‘making European countries the largest consumers of antidepressants in the world.’

More recent, granular data since the start of the pandemic draw from a 2020 study in England that found an additional 92 million units of antidepressants prescribed between January and August 2020, a relative increase of 5.78 percent over the same period the previous year.

A two- to threefold increase in antidepressant prescribing was found to exist across France, the United Kingdom, the United States, Asia, and Australia more generally . . .

In addition to concerns about their modest efficacy relative to placebo, SSRIs introduce problems of their own. ‘Associated with increased hostility, suicidal ideation, and psychomotor agitation in clinical trials with children, adolescents, and young adults,’ they are frequently associated with sexual dysfunction and long-lasting withdrawal symptoms, and for the body and environment generate problems because they do not metabolize rapidly or straightforwardly . . .

SSRIs in the Water

From toxicology reports of SSRIs on diverse aquatic organisms, principally fish, and studies of the drugs’ ‘unchanged metabolites’ on ‘discharges of industrial, domestic, and hospital effluents,” the researchers find such recurring traits in the fish as ‘significant decrease in locomotor activity,’ ‘significantly lower velocity,’ ‘reduction of swimming distance,’ and ‘increased aggression.’ In the case of fluoxetine (Prozac), under ‘affects sexes differentially,’ they note ‘altered male mating strategy’ and ‘affected maturation of predatory behavior,’ including ‘significantly more coercive “sneak” copulations,’ and the drug ‘affecting the [species’] total hatching time,’ by accelerating it.

. . . Until action is taken, the trace elements of mass-prescribed antidepressants will remain ‘widely distributed in surface waters around the world,’ to varying degrees, altering the behavior of every animal and human that comes into contact with them.” 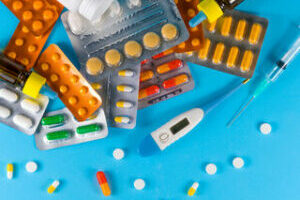