From Psychology Today: “Javier has trouble opening up and keeping conversations going. He wonders why social interactions are so challenging for him, and he assumes he’s simply lacking some special ingredient that other people have.

Isabel is fiercely independent but knows deep down it’s because she fears that if others get too close to her, they won’t like what they see.

Despite Liz’s success and status as a surgeon, she often feels like she doesn’t belong.

What do Liz, Javier, and Isabel have in common? I call it the ‘fatal flaw,’ and it results from growing up with childhood emotional neglect.

The ‘fatal flaw’ is the deep-seated belief that ‘something is wrong with me.’ It feels like a dark secret, and the people who hold this belief silently struggle.

It has taken some time in my 20-year career as a psychologist to truly understand the inner workings of the fatal flaw. Folks I work with are mostly unaware of this deeply held belief. It’s like the background music playing in a store as you shop. Unless you bring your attention to it, it’s not something in the front of your mind.

As I continued to work with people just like Liz, Javier, and Isabel throughout the years, the music gradually grew louder as we uncovered integral memories and perceptions about their lives. And the closer we listened, we didn’t hear smooth jazz or tranquil melodies; what we heard were harsh tones with messages like ‘You’re unlikeable’; ‘You’re so weak’; ‘You’re different’; or even ‘You’re worthless.’

It’s not difficult to hold a belief that isn’t fact. The important thing here isn’t whether the message of the fatal flaw is real or not (we know these people are worthy and deserving). What’s important is that the feeling that comes from this deeply held belief is real. This feeling is powerful and can follow you around for a lifetime. Below we will explore how Liz, Javier, and Isabel developed their ‘fatal flaws.'” 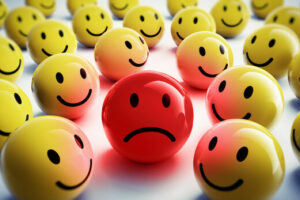