From the Windsor Star: “In July 2004, David Carmichael of Toronto strangled his 11-year-old son to death.

Although Carmichael was charged with first-degree murder, the courts did not find him criminally responsible: He killed his son while in a psychotic state brought on as a side effect of his prescribed use of the anti-depressant known as Paxil.

Now Carmichael is on a cross-Canada tour to urge people to be more aware of the prescription drugs they consume.

‘You’ve got to question your doctor. I think that’s really important,’ said Carmichael, 53, before his speaking engagement at Canterbury College on the University of Windsor campus on Thursday.

‘There is a lot of work that people should do, and that’s why I’m really trying to talk to the broader population, who have never thought there may be some issues about their prescription drugs.’

For the past six years, Carmichael has been involved in the Know Your Drugs campaign, which was developed by the drug awareness website RxISK.org.

‘The average 65-year-old is on five prescription drugs.'”

David Carmichael’s cross-Canada tour is now heading into Western Canada. The next public discussion about prescription drug safety is on June 14 in Calgary. You can support the tour by making a charitable donation to Canadians for Vanessa’s Law, anonymously if you prefer. 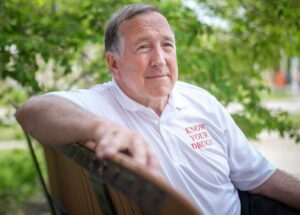