From Raised Good: “When I read Kim John Payne’s book Simplicity Parenting, one message leapt off the page. Normal personality quirks combined with the stress of ‘too much’ can propel children into the realm of disorder. A child who is systematic may be pushed into obsessive behaviours. A dreamy child may lose the ability to focus.

Payne conducted a study in which he simplified the lives of children with attention deficit disorder. Within four short months 68% went from being clinically dysfunctional to clinically functional. The children also displayed a 37% increase in academic and cognitive aptitude, an effect not seen with commonly prescribed drugs like Ritalin.

. . . Early in his career, Payne volunteered in refugee camps in Jakarta, where children were dealing with post-traumatic stress disorder. He describes them as ‘jumpy, nervous, and hyper-vigilant, wary of anything novel or new.’

Years later Payne ran a private practice in England, where he recognized many affluent English children were displaying the same behavioural tendencies as the children living in war zones half a world away. Why would these children living perfectly safe lives show similar symptoms?

Payne explains that although they were physically safe, mentally they were also living in a war zone of sorts, ‘Privy to their parents’ fears, drives, ambitions, and the very fast pace of their lives, the children were busy trying to construct their own boundaries, their own level of safety in behaviours that weren’t ultimately helpful.’

Suffering with a ‘cumulative stress reaction’ as a result of the snowballing effect of too much, children develop their own coping strategies to feel safe.” 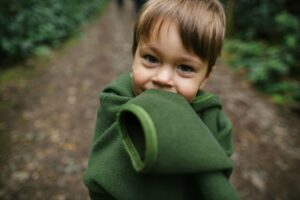