From Mother Jones: “Horepa ‘Repa’ Tautolo, who is in her early 30s, grew up in the Bayview and joined the crisis responders in 2021. On the October day I shadowed her, she wore hoop earrings, ripped jeans, and a black sweatshirt that said ‘Straight Outta San Francisco.’ Soft-spoken, with a calm voice and gentle demeanor, she clearly has a high regard for the people she helps. ‘They’re very intuitive and smart; most folks we come across, they’re very talented,’ she tells me.

To build trust, San Francisco’s crisis responders work with peer support counselors like Tautolo. The idea is to have someone with lived experience who can connect with clients on the street. ‘This community in particular, they catch up on a lot of, I wouldn’t say fakeness, but they pick up on non-genuinity,’ Tautolo says.

This is a unique feature in San Francisco, which, unlike cities like Los Angeles and San Antonio, does not send cops out with its crisis response teams. The thinking is that counselors like Tautolo can more easily bridge the gap with neighbors who might be skeptical of a city-led effort. ‘The lived experience cannot be understated,’ says Kathleen Silk at San Francisco’s Department of Public Health. ‘The peer on our team can drive a lot of interactions that might otherwise be almost impossible to navigate.’

Prior to getting the job, Tautolo spent time unhoused; she says she views her clients today like her own family. If a person is having a breakdown, she often sits beside them, giving them space until they want to talk. She’ll offer some food, from granola bars to pineapple shortbread, to help them relax. During her first day on the job, she even sang a song for a client, a woman who’d been cursing out the other health workers but seemed drawn to Tautolo. After Tautolo finished a Samoan song, the woman apologized for her outburst. ‘Everyone loves Repa,’ says Fenderson, the behavioral health clinician on her team.

The team’s goal is not just to build trust with individuals in crisis, but with the entire community. ‘It’s more art than science,’ says Meraw, the paramedic who rides with them . . .

Even if someone doesn’t want a shelter bed or drug treatment, the crisis responders try to support them in other ways. ‘They see that we’re not trying to push anything—we’re not trying to make them do a bunch of stuff they really don’t want to do,’ says Meraw. ‘We’re still there to offer them snacks, a hat, socks. It builds a chance for us to maybe get a little bit further with somebody the next time we see them.'” 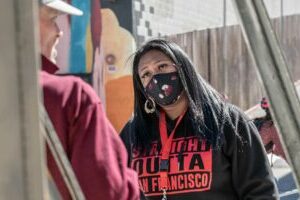