From The Independent: “New information obtained under freedom of information (FOI) laws shows women in England were 59 per cent more likely to be prescribed benzodiazepines – better known by the brand names of Valium, Xanax and Temazapam – than men between January 2017 and December 2021.

. . . Benzodiazepines are commonly prescribed for anxiety and insomnia, with the drug’s withdrawal symptoms including depression, acute anxiety, insomnia, vivid nightmares, headaches, vomiting, shakes, cramps and, in the worst cases, seizures which can cause death.

Many countries explicitly state benzodiazepines should not be taken for more than four weeks, while research has found benzodiazepines can cause memory loss and Alzheimer’s.

In September 2020, the US Food and Drug Administration announced its ‘black box warning’ must be placed on all benzodiazepines to inform patients withdrawal from the drugs can be life-threatening.

. . . GPs are ‘desperately’ attempting to get people off benzodiazepines, [said UCL professor of psychiatry Joanna Moncrieff], as she noted people addicted to heroin or alcohol are able to come off them more quickly than individuals dependent on benzodiazepines.

Prof Moncrieff explained that she recently set up a ‘trailblazer’ clinic which helps long-term users of benzodiazepines – also known as ‘benzos’ – antidepressants and sleeping tablets get off the drugs.

. . . Fiona French, who lives in Aberdeen, told The Independent she was first prescribed benzodiazepines in 1975 due to her arms and legs experiencing spasms . . . ‘There was no information given about the dangers. As soon as I started to take benzos, I became unwell.’

Ms French said she failed to link her ‘rapid deterioration’ to the benzodiazepines . . . I made repeated attempts to take my life. I was never suicidal before I was on benzos.’

. . . ‘When I retired [in 2012], I changed GP practice and had a medication review . . . He suggested I think about coming off them but he didn’t give me any advice on how to come off them.’

Ms French decided she would taper herself off the drug, saying she became extremely ill six months after stopping taking benzodiazepines completely – adding that she was predominantly confined to her bed for almost two years.

‘I could only stand on my feet for about five minutes. I couldn’t have a shower as I couldn’t tolerate the water against my skin. It was like living in a chemical haze and I couldn’t remember what was happening from one hour to the next. Night became day. Day became night. It was a bit like having dementia. It was a brain injury.’

For around three years, she only left the house to go to the doctors, she said, adding that an NHS neurologist told her the illness had been caused by the shock of stopping the benzodiazepines.

Ms French said it was ‘very upsetting’ when the dangers of benzodiazepines emerged in the 1980s, noting she watched a documentary about a man who said coming off the drugs was harder for him than his stint fighting on the front lines of the Second World War.

She explained how she initially needed a wheelchair during her recovery as she noted she is now in a much better state but still grows tired easily.

‘I would never take them again,’ Ms French concluded. ‘Any drug that can cause that degree of intolerable suffering is a bad drug.'” 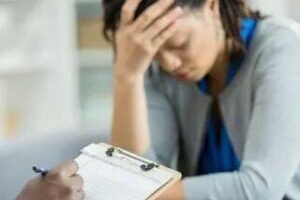