From Return to Now: “It may seem crazy, but until very recently most doctors were trained to believe babies don’t feel pain — or at least not as much as adults do — with the rationalization that their nervous systems weren’t fully developed.

Under this belief, all kinds of traumatically painful operations and surgeries were performed on them without anesthesia or pain medicine until at least the late 1980s.

In 1987, the American Academy of Pediatrics declared it was no longer ethical to perform surgery on premature babies without anesthetics, but to this day, both preterm and full-term babies endure a surprising number of painful procedures without any form of pain relief.

Finally, a landmark study out of Oxford University has proven that babies feel pain not only as much as adults do, but more so.

The pioneering study used a Magnetic Resonance Imaging (MRI) scanner to determine babies brains ‘light up’ in a very similar way to adults when exposed to the same painful stimulus.

Researchers found that 18 of 20 ‘pain regions’ active in adult brains are also active in newborn brains, and that babies are actually four times more sensitive to pain than adults. 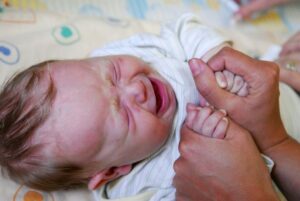