From The Wall Street Journal: “In an advertisement on Facebook and Instagram, a middle-aged man holding a dumbbell says testosterone ‘literally changed my life,’ restoring his energy and happiness.

What the October ad from telehealth startup Hone Health doesn’t say is that the unidentified man is an actor who has never used the prescription drug. It doesn’t mention that testosterone is approved by the Food and Drug Administration only for men with specific disorders and that among its risks are heart attacks and stroke.

Similar telehealth companies are flooding TikTok, Instagram and other platforms with ads that don’t conform to longtime standards governing the marketing of prescription drugs and healthcare treatments. They feature actors posing as customers, tout benefits of drugs with no mention of side effects and promote medications for uses not approved by the FDA.

Since the pandemic, online advertising has drawn hundreds of thousands of people to telehealth companies such as Cerebral Inc. and Done Global Inc. for treatment of attention-deficit hyperactivity disorder, anxiety and other ‘medical’ conditions. Some employees and patients have said their marketing practices contributed to the abuse of controlled substances.

In a four-week period spanning October and November, about 20 companies ran more than 2,100 ads on Facebook and Instagram that described benefits of prescription drugs without citing risks, promoted drugs for unapproved uses or featured testimonials without disclosing whether they came from actors or company employees, according to a Wall Street Journal analysis of ads collected by the nonprofit Algorithmic Transparency Institute from Meta Platforms Inc.’s ad library.

Those drugs included controlled substances, such as ketamine and testosterone, which are tightly regulated by the federal government due to their potential for abuse, and medications that normally carry boxed warnings, among the most serious types of safety warnings mandated by the FDA.

In the two years since the government expanded the scope of medical services allowed via video calls, telehealth companies have been operating largely outside advertising rules that govern drugmakers, a gray area subject to little government oversight or guidance. Instead, the main gatekeepers exercising the power to review or remove telehealth advertising are the social-media giants paid to run the ads.” 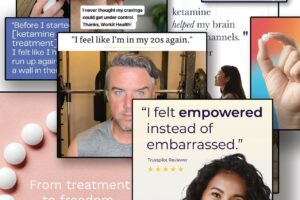