In the last year of high school, my daughter’s personality suddenly changed, almost overnight it seemed. Initially, I chalked it up to adolescence.

What had happened to my shining star? My bright, loving and outgoing daughter who was looking forward to college—where did she go? How could I get her back?

I was at a total loss, a single parent with three children and no idea where to go. We tried many things, but nothing seemed to work. Eventually my daughter ended up in a hospital.

The next ten years we spent navigating a fragmented and often difficult mental health system in several states. Those ten years were the loneliest and most difficult years of my life.

Never had I felt so alone, forlorn or blamed for being the cause of my daughter’s illness.

My daughter was treated as a diagnosis with dim prospects rather than as a beautiful young woman with hopes, dreams and potentials. Not once did I hear someone ask her, “What are your dreams for the future?” or “How can we help you achieve your goals?”

Treatment had become mistreatment. My daughter had become a collection of symptoms to be managed and controlled with a battery of medications, hospitals and group homes. Recovery was a word I would only learn many years later.

I started dreading the calls from mental health professionals. The news was never empowering. They would tell me they could not help my daughter and needed to send her back home. Or they would call to tell me she had run away… again. Looking back, I would have run too. About the only route we did not travel was jail, which for many has become today’s mental hospitals.

As my daughter’s health worsened, so did mine. I developed debilitating asthma. I became literally and figuratively out of breath. Well, almost…

No matter how bad things got, I still refused to accept the status quo. When I asked if we could create treatment plans that met my daughter’s unique needs, I was told I didn’t understand. It was made clear that I should accept ill-fitting diagnostic labels and treatments if I wanted any help from the mental health care system.

Hope had become a four-letter word. I was told over and over again to learn to live with my daughter’s illness and her limitations.

In other words, recovery was pipe dream. Getting better, unrealistic.

The clincher, after a decade of trying to find real help, was when I was told that I had probably caused my daughter’s mental illness. That it was my fault.

The moral of this story: Never make a Mother Bear mad!

Not only was I mad, I was also smart enough to know that my anger and frustration would not solve any problems. 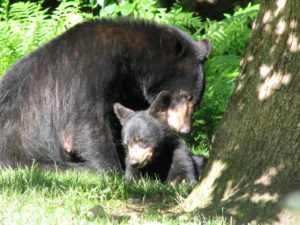 Instead, I decided to turn my anger into action and asked my husband Don, with his considerable business acumen, to join me in starting a non-profit residential healing community.

While he had been looking forward to a leisurely retirement, I managed to convince him otherwise. He will tell you today that this is the most meaningful work he has ever done.

Our vision was to create a place where hope would be the first order of business, where acceptance and community would be commonplace, where individuals would be treated with kindness and respect. We would focus on strengths and potentials rather than diagnoses. Our residents would be welcome guests not “cases” to be “managed.”

Treatment would be person-oriented and would encompass the body, the mind and the soul. We would ask residents about their dreams and goals, and we would help them develop the skills to reach them. All of this combined would become what is now CooperRiis Healing Community (http://www.cooperriis.org).

As our vision became reality, there was not a stone laid or a decision made without reflecting on what our daughter would want. What would help her to heal? What could we do to make our community beautiful, peaceful, meaningful, and purpose driven?

During initial staff training, our daughter shared her insights and helped us develop our training program. I often heard her say, “That might be what the textbook says, but let me tell you what it is really like.”  She knew better than any of us.

Through my daughter’s hard-won experience and wisdom and the philanthropic generosity of so many, CooperRiis is now a place where a dentist or an artist, a student or a lawyer, a homemaker or a teacher, your neighbor or family member can recover from mental illness and go on to lead productive and meaningful lives.

I am truly grateful we have been able to create a wonderful healing community here in North Carolina that has helped hundreds of families from all over the world. But I realize this is only a drop in the bucket.

Over the past nine years, families have often asked us,

“Where is our CooperRiis?” and “Where can we go for healing and support?”

In our next blog, we’ll share what we’ve been telling them recently.