I’m overwhelmed by the complicated multi-issue medical reform legislation being batted about. I feel hopeless that any such massive reform bill can survive the hazing of the cash-for-lobby, tit-for-tat, back scratch for back scratch political process. All the well-thought, well-meant, carefully constructed and intelligent but enormous documents have about as much chance of making real change as that old camel has to make it through the eye of  a needle.

I’ve been looking for a simple place to start. Something that could have a bigger impact than my one doctor’s teaspoon in our ocean of despair.

And I think I’m on to something. Rattling around with readers in the comments and replies this week has been good. I feel more hope than I have in a long time.

Please bear with a piece of my personal history here. History is important.

When I took my oath in 1983 to be licensed to practice medicine in the State of Louisiana and to abide by the governing laws of the state, we had to study the legal code beforehand. How else were we to know the laws to abide by?

I remember one set of laws to this day because it took me by surprise. I don’t remember any of the other rules specifically because I expected them. The ones I expected were the common sense laws about professional conduct, medical conditions that must be reported to the state and tort liability limitations particular to that region of the country. Those sorts of things.

The one section that caught my attention out of the pages I was given to study were lines of legal code that were scrupulously clear about the ways in which physicians, and all other medical providers, could advertise themselves. I don’t recall the specific dimensions, but the law stated the precise size one could post one’s name on the shingle when you hung it out and the smaller size of the lettering allowed below your name for your specialty of practice. Even on business cards and in the phone book, the same size ratio of name to specialty held. No other general advertising was allowed.

I recall feeling first astonished and then pleased to discover that advertising by medical providers was forbidden by law. It was fun to imagine the situations that must have lead to the need to enact such legislation, perhaps competing doctors with sign wars across a neighborhood street. I couldn’t imagine how medical advertising could get out of hand in these modern times. We were professionals providing necessary care, after all. There is no need for big signs. When people get sick, they go to the doctor’s office. Simple.

I assumed these advertising rules to be national laws. I must have slept through high school civics class back in Ohio and missed the state’s rights part.

When I moved to Oregon in 1985 and read their laws before being sworn in to abide by the laws of that fine state, I was equally astonished to find no such rules. Although I was aware that the laws in Louisiana grew out of French Napoleonic law and were different from the rest of our country, I didn’t notice the differences till I moved away. I can only see the inside of the box once I’ve stepped outside.

At first I was sure that this lack of advertising rules meant that the medical providers in the lovely, green state of Oregon had been naturally discrete and well-behaved in the way they let people know they were in business. At the time, the range of advertising and signage was not too far out of line.

Remember, this was all a long time ago. I’m old. I remember the ban of cigarette advertising on television in this country and the liquor ad ban. There was a strong grassroots sense during the sixties and seventies that one of the government’s jobs involved public health and safety. As television became a stronger force in our culture it was clear, especially to parents, that industries were incapable of policing their own marketing campaigns. There is simply too much money at stake. The government had to step in and police the media of known public health hazards. This made sense to me.

I haven’t taken a course in economics but I’m certain I recall hearing of the effects of “supply and demand”. I also know that demand can be increased by effective marketing campaigns and by lowering the perception of supply. We’ve all seen this.

You will be better at knowing the prevalence and tenor of the current media advertising frenzy of pharmaceutical products than I. Remember, I turned off the broadcast media in my home ten years ago. Through lack of exposure, I have been so sensitized to the media that even an old movie played without sound across a crowded room snares my attention. I have to remember to rip my eyes away from it and attend to the real people right in front of me.

Last month I was in a motel lobby while on a trip. A wide television screen played behind the counter when I walked in with my children. On the wall, an achingly handsome, larger than life man with carved mahogany cheekbones was filling the tank of his vintage muscle car at a gas station in the middle of the American west. We stood entranced. I was reminded of the cigarette ads of my childhood for a moment. He looked like that cowboy.

Snap to attention. This is an ad for the pharmaceutical product that fills my spam filter every day, just what I want my kids absorbing at the end of a long day’s drive. Strangers who do not have our best personal interests at heart are handed access to our deep unconscious minds, given a straight pipeline.

Back to this economic concept of supply and demand. The most simple way to reduce the clamor for pills that has been artificially induced by advertising is to shut off the flood of advertising. This will cause a gradual softening of market demand.

We have to take a lesson from other first world countries and outlaw marketing of pharmaceutical products directly to the public. Removing the advertising pipeline from our heads is good place to start because we have successfully done things just like this in the past.

As always, thanks for reading me. 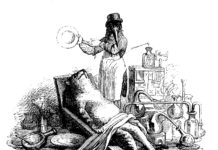 Putting Profits Ahead of Patients

Winners of the American Dream

About Being Paul Revere