As a person who never celebrated Christmas, I quietly observe my friends as they anxiously search for Christmas presents for everyone on their list. I imagine if I were to get a lot of presents, I might want to return some of the stuff I’d received. Similarly, I like to return stuff of any kind that feels excessive or like it isn’t useful to me, or isn’t mine to have. Once I had art I’d borrowed from an ex-boyfriend hanging in my apartment for nearly a year after we’d separated before it occurred to me I wanted to return him his stuff.

Besides physical stuff to return, we also have emotional stuff to return or release. In relationships we often have an unspoken agreement: “I’ll hold your stuff if you hold my stuff.” This is not stuff that comes in a wrapped package with a bow on top, but in a way it is. It is stuff we can feel, and stuff underneath the “package” of the person we first met. This is why we don’t always feel that sense of “holding someone’s stuff” right away when we first meet. But if we spend enough time with anyone, we will unwrap the gift and get to see the stuff, as well as hold it. When there is a lot of “stuff holding” people often get weighed down and sick. In any situation where someone is ill or in emotional turmoil, I’d be curious to ask that person, “Do you need to return someone their stuff?”

I once had a unique experience with a young acupuncturist/Chinese medicine doctor in training. He asked me a question that in my 31 years no doctor had ever asked me before. Yet it was a simple question. “What do you think your health issues are about?”

It instantly shook me out of my habitual thinking and “role” as a patient. In a sense he was “returning me my stuff.” The doctor patient relationship is no exception; it has a contract of stuff holding. In the Western medical model the patient holds the doctor’s stuff- her or his “sense of authority,” while the doctor holds the patients stuff-her or his vulnerability in illness and fear of looking at root cause or deeper issues. Together they hold societies “stuff”-being scared of change, revolution and the potent wild creative power that lies dormant in many of us. Medicalizing and drugging everything is a sure strategy for holding all this stuff. This is true in all fields of medicine, and in psychiatry it is more glaring. With all this “stuff holding” disguised as medicine, it’s no wonder the medical system is failing to heal, connect and restore us.

The potency we fear has healing power. I took a breath feeling both present and a bit exposed before I even answered the young doctor. I thanked him for asking the question, such a simple and obvious shortcut to finding out the root cause of my health concerns. It was so much more common sense than I ever receive from doctors that it makes me laugh. The answer felt heavy, however. I got quiet and listened for my truth as I wanted to accept this opportunity for mutual learning. This brave and wise young man in his 20s had wisdom beyond many doctors 2 or 3 times his age.

The answer I heard myself say was, “I am holding things for other people. My family and society.”

Meditating this Christmas (there’s time for that when you aren’t running around buying knick-knacks) upon some recurring health issues and patterns in how I feel in relationships, I found myself wanting to give people back their stuff. I lay still in bed before falling asleep and visualized first each member of my immediate family, imagining myself giving each one back their stuff. Other people followed, pretty much all people close to me or those I felt any conflict with or heaviness around. For some people, especially in my family, I noticed there was a lot of “stuff” to give back. I felt like I was carrying bags of sand and returning them in pails full. It took some time to return it all, but once I did, I felt lighter.

The kidneys, liver and other internal organs get bogged down, weak and stagnated when we hold these things, such as shame, guilt or fear. Everyday, or as often as I can remember, I intend to practice returning this stuff.

When we talk about an identified patient in the family or community, we are referring to somebody who is carrying other peoples’ returnable stuff. If you find yourself ostracized or in that role, try this visualization: Imagine any heaviness you feel being returned to whoever it is coming from. If it feels heavy, it isn’t yours.

That’s not to say there is anything wrong with heavy feelings. Holding people’s stuff is a natural, normal and inevitable part of coexisting with other humans. Yet the more sensitive, compassionate and empathic among us can become bogged down, overwhelmed and unable to take care of ourselves if we hold others’ stuff for too long. So if you are reading this around Christmas time after receiving a lot of stuff-whether gifts or old family dynamics, or even feeling lonely because other peoples stuff doesn’t resonate or fit, I offer you this holiday gift. Return people their stuff. I feel much lighter after doing so and I think you will too.

Holding people’s stuff is a coping mechanism we develop as children when our families and communities don’t have enough support. I learned that holding family members’ stuff when they didn’t seem able to handle it made me feel safer. But these patterns are old and outdated. If we hold this stuff for too long we eventually fall down exhausted. When you feel light and at ease, free of fear, guilt or shame, you know you have done this practice successfully. It isn’t about causing harm to others or dumping on them either, but giving them the opportunity to not hurt you. Health isn’t heavy. It’s light.

After this visualization, you can imagine returning it wrapped as a gift. That’s how I want my stuff returned to me, because stuff is good, when it is in the right place, in the proper hands. 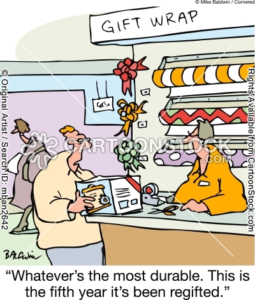