A study in PLoS One shows that the number of National Heart Lung, and Blood Institute (NHLBI) funded drug trials reporting positive results declined precipitously after the implementation of the clinicaltrials.gov registry, which requires researchers to record their trial methods and outcome measures before collecting data.  Of the 55 studies examined, 57% percent of those published before the implementation of clinicaltrials.gov in 2000 yielded a positive result.  After 2000, only eight percent of trials claimed a significant benefit to the intervention examined. 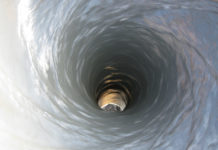