A recent article in the American Journal of Public Health calls for policy level interventions to reduce the use of benzodiazepines, drugs commonly prescribed for anxiety, after presenting data on their increased use and the high rate of overdose deaths. Tracking medical data from 1996 to 2013, the researchers conclude the benzodiazepine prescriptions and overdose deaths have increased considerably. 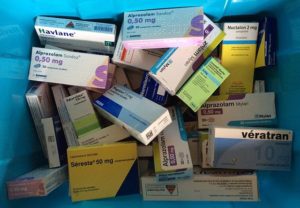 “In 2013, an estimated 22,767 people died of an overdose involving prescription drugs in the United States.” “Benzodiazepines,” the researchers write, “were involved in approximately 31% of these fatal overdoses.”

Also, the data showed that people getting prescriptions for benzodiazepines were given more of the drug than in the past. The median quantity filled over the course of a year for a patient increased by 140%. According to the CDC data, the rate of overdose deaths increased more than 4-fold by 2010 and then began to plateau overall. Overdose deaths continued to climb for minorities and the elderly, however.

The researchers underscore the public health implications of these findings:

“In summary, the number of American adults filling a benzodiazepine prescription is increasing, and the quantity filled is also increasing.  Although the rate of overdose deaths involving benzodiazepines has stabilized overall and in most groups, it remains more than five times the rate at the start of the study period. Continued increases in overdose deaths involving benzodiazepines among certain groups (e.g., older adults and racial/ethnic minority individuals) are concerning. Furthermore, we found no evidence of reductions in any group. Interventions to reduce the use of benzodiazepines or improve their safety are needed.”