As both a pediatrician and psychoanalyst, D.W. Winnicott had a unique view of human development. In his pediatric practice, he was immersed in the lives of developing infants and parents. (As the mother was usually the primary caregiver at the time he was practicing, he writes primarily of the mother-baby relationship.) In his psychoanalytic practice where his patients, in his words “regressed to dependence,” he had a kind of mothering experience with an adult person who could communicate with both body and verbal language.

In preparation for teaching a course on early childhood mental health at William James College, I had the pleasure of reconnecting with the profound wisdom of his writings. While Winnicott wrote extensively for both a general and a professional audience, I discovered, on careful re-reading of his essay for a general audience entitled “The Ordinary Devoted Mother” that it contains a vast wealth of ideas. In fact, if I had to assign only one paper for the entire course, this could be it.

He begins in his delightfully humble way by saying that he had no wish to tell mothers what to do because, ” To start with, I didn’t know.” Like his American counterpart Benjamin Spock, he acknowledges the mother as the expert with respect to her child.

Identifying how his approach is sometimes misinterpreted as blaming mothers, he calls attention to an inherent conflict. He writes:

“But is it not natural that if this thing called devotion is really important, then its absence or relative failure in this area should have consequences that are untoward?”

Later in the essay he returns to the problem of blame, but first points out that this ordinary devotion is contingent on the mother herself being cared for.

“I think that by the time the baby is ripe for birth the mother, if properly cared for herself by her man or the welfare state or both, is ready for an experience in which she knows extremely well what are the baby’s needs.”

Had he been writing today he would likely call attention the profound implication of our failure to support for mothers in the postpartum period, as represented by the absence of government sponsored paid parental leave. We are uniquely lacking in a culture of postpartum care, as I describe in detail in a previous post.

Next Winnicott introduces another central concept of his, referred to in other works as “the holding environment.” He identifies the profound nature of the care a mother offers:

“You will understand I am not simply referring to her being able to know whether the baby is hungry or not, and all that sort of thing; I am referring to innumerable subtle things, things that only my friend the poet could put into words. For my part, I am contented with the word hold, and to extend its meaning to cover all that a mother is and does at this time.”

He then goes on to speak of what in his other writings he refers to as the “good-enough mother.” He describes how a mother in a healthy way fails to adapt completely to her baby’s needs, in parallel with his growing ability to manage frustration.

“In time the baby begins to need the mother to fail to adapt-this failure being also a graduated process that cannot be learned from books. It would be irksome for a human child to go on experiencing omnipotence when the apparatus has arrived which can cope with frustration and relative environmental failures. There is much satisfaction to be got from anger that does not go over into despair.”

This concept has been supported in the research of developmental psychologist Ed Tronick who has shown that these very disruptions, along with their subsequent repair, give a developing child a positive sense of himself.

Winnicott then returns to the idea of blame, wisely pointing out its close connection to the concept of guilt, an experience that comes naturally with the role of parent.

“Here I must go back to the idea of blame. It is necessary for us to be able to look at human growth and development, with all its complexities that are internal or personal to the child, and we must be able to say: here the ordinary devoted mother factor failed, without blaming anyone. For my part I have no interest in apportioning blame. Mothers and fathers blame themselves, but that is another matter, and indeed they blame themselves for almost anything.”

He sticks with his conviction that we cannot shy away from calling attention to the importance of the mother-child relationship for fear of being accused of blaming parents.

“But I have one special reason why I feel we must be able to apportion etiological significance (not blame), and that is that in no other way can we recognize the positive value of the ordinary devoted mother factor- the vital necessity for every baby that someone should facilitate the earliest stages of the process of psychological growth, or psychosomatic growth, or shall I say the growth of the most immature and absolutely dependent human personality.”

Contemporary research at the intersection of developmental psychology, neuroscience and genetics is revealing more every day of how early experience gets into the body and brain, and how disruptions in early relationships can lead to long-term problems of both physical and emotional health. Winnicott anticipates this knowledge when he writes:

“Psycho-somatic existence is an achievement, and although its basis is an inherited growth tendency, it cannot become a fact without the active participation of a human being who is holding and handling the baby. A breakdown in this area has to do with all the difficulties affecting bodily health which actually stem from uncertainty in personality structure. You will see the breakdown of these very early growth processes takes us immediately to the kind of symptomatology which we find in mental hospitals belongs initially to infant care.”

He concludes with the following observation, which can serve as a kind of call to action for our society to nurture and protect these earliest relationships. 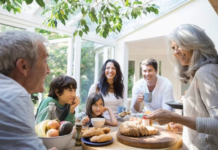 Good Relationships are all in the Family