This article is reprinted, with permission, from Truthout.org.

This week, President Obama signed the 21st Century Cures Act, touting the bipartisan mental health measure as “bringing to reality the possibility of new breakthroughs to some of the greatest health-care challenges of our time.” However, the reality behind this legislation is not quite what it appears to be.

The 21st Century Cures Act will increase the ease with which individuals can be involuntarily hospitalized in a locked ward, increase funding for institutionalized settings, and demand that states implement forced outpatient treatment in order to receive funding. Many media reports are suggesting that it will fix a broken mental health system, incorporate patient voices into clinical processes, decrease mass violence and modernize clinical trials. But will it really? Here are seven reasons why Obama’s signing of the 21st Century Cures Act is less than grounds for celebration.

1. Sandy Hook and other tragedies will not be avoided by the measures contained in this bill. There is no debate at this point about the fact that individuals who are diagnosed with serious mental illness are more likely to be victims of crime than perpetrators. Further, they are rarely violent in the first place.

Yet, the “reform” this bill seeks was formulated largely in reaction to the tragic Sandy Hook killings in 2012. It is a product of the assumption that “mental illness” is responsible for mass acts of violence, and that the answer is more psychiatric treatment, often treatment of a coercive and restrictive nature.

However, the story that doesn’t get told is that the perpetrator of that mass shooting was in psychiatric treatment and on numerous psychiatric drugs at the time of the killing. In fact, almost half of all of those who’ve committed homicide were on their prescribed psychiatric drugs at the time of offense. Moreover, forced treatment is associated with increased violence, as are some of the drugs being touted as the answer. Yet, with this bill, forced hospitalization in locked wards becomes a go-to response for an individual who is in extreme emotional distress.

Why does anyone think that doing more of what was already being done is the answer?

2. The “reform” actually sets back many advances made in the 20th century. While hospitals may be a source of respite and healing for many, taking individuals by force and locking them away in the name of “help” is akin to prison and has been ruled inhumane by the United Nations.

How is it that the public has been led to believe that imprisoning individuals who have committed no crime, taking away their privacy and rights, and forcing them to ingest toxic and brain-damaging chemicals for the rest of their lives are advancements? We can all look back and shake our heads in disgrace at the thought of blood-letting, insulin comas and lobotomies. Who will be shaking their heads at us in the future?

The mental health system as a whole has spun a story asserting that if an individual disagrees with a psychiatrist’s framework or understanding, then this is evidence of that person’s disease. This is true even if the dissenting voice is another mental health professional.

The treatments being promoted by this bill are, in fact, associated with increased violence, increased negative attitudes from clinicians, and increased discriminatory attitudes among the public. In turn, this may lead to worse outcomes, poorer quality of life, decreased employment and increased self-hatred.

Despite this, many alternatives to mainstream mental health care have arisen throughout the world demonstrating superior outcomes, increased satisfaction and decreased overall costs to society. This bill ensures that no such programs, in their current form, will ever find their way to the United States.

3. It does not help people live in the community. The Cures Act excitedly references Assisted Outpatient Treatment and its ability to keep people in the community. However, what this treatment entails is holding individuals’ freedom and housing hostage unless they take their drugs and follow the rules. If they do not follow the rules, they may face forced hospitalization as a violation of their court order.

There is no evidence to support the conclusion that forced hospitalization actually decreases violence, aggression or re-hospitalization. It doesn’t. The results are mixed at best and largely are due to mandated efforts to keep people out of hospital, no matter their behavior or reactions.

In fact, this bill takes money away from more humanistic, community-based programs that allow for people to eventually work and function in society. These housing-first alternatives actually appear to be just as effective if not more so than Assisted Outpatient Treatment, without the coercion, loss of rights or force. People also tend to prefer these interventions.

4. No extra money is going towards helping people. In the Cures Act, money is being redistributed away from current programs, such as Substance Abuse and Mental Health Services Administration programs, toward institutionalized settings and medical interventions. This might not be a problem if there was actual certainty of the medical nature of emotional distress, but there is not.

Money is also being taken away from peer support efforts, as these are deemed inessential and a waste of money. Peers, in the mental health system, are considered any individuals who use their own lived experiences with similar issues to support those in crisis. In other words, those who have been there help out those who are having difficulty finding their way. At the same time, the peer supports that are being funded are going to be transformed into some kind of clinical caricature, wherein peers must follow clinical guidelines established by medical doctors that, basically, amount to telling people to take their meds.

Peer support, which can be enormously helpful for many, is being corporatized and “manualized” to fit into the current psychiatric machine. The thing is, relationships don’t always require a manual. And sometimes, when a person has been through something and come out the other side, that person might actually have an idea or two on what could be helpful to someone else.

Imagine if Alcoholics Anonymous followed a strict manual and could no longer exist independent of corporations and institutions.

5. Effective treatment is not the focus of this bill. Congress has told the public a fairytale in suggesting that “early intervention” and faster “treatment” are innovative advancements being promoted by this bill. What these words actually mean is getting drugs to people immediately.

The bill ignores the fact that effective interventions that result in actual biological healing, decreased suffering, increased life satisfaction and decreased aggression tend to come in the form of healthy family relationships, psychotherapy and exercise. Drugs may play a significant role, particularly during times of crisis, but are not the only helpful tool, and they are certainly not a one-size-fits-all solution.

This bill explicitly takes money away from holistic and relationship-based interventions and shifts the money to the profiteering administration of drugs that are only clinically and functionally helpful for a fraction of patients. Even then, drugs are often helpful for short periods, after which the problems are sometimes made worse.

6. This bill is not based on the advocacy of users of mental health services. Many sources cite mental health advocates as a major force behind the development and passage of this bill. However, people with lived experiences of hospitalization, forced treatment and other interventions that will be increased under the provisions of the bill generally do not support this bill. Many have actively and vocally fought against this bill since its original inception in 2013.

The “advocates” described as supporting this bill are largely comprised of family members who are overwhelmed, desperate and motivated not to reflect on family dynamics as possible contributing factors to an individual’s emotional distress in the first place.

7. Pharmaceutical greed and conflicts of interest underlie everything about this bill. Bernie Sanders summed up quite nicely just how much the pharmaceutical companies (and in turn, Congress members who developed this bill) will stand to profit off such “reform.” Elizabeth Warren went further in describing how the bill and the mental health system have been “hijacked” by the pharmaceutical industry.

Currently, psychiatric drugs already get approved in part due to pharmaceutical companies’ suppression of information about dangerous effects, fatal outcomes, and lack of evidence of clinical efficacy. This bill will now make it even easier for the drugs to quickly come to market.

Snake oil, the infamous placebo that made many a salesman rich over 100 years ago, at least did not kill people.

The 21st Century Cures Act is an epic failure that will result in major profits for pharmaceutical companies and their representatives in Congress. It will increase the suffering of hundreds of thousands of individuals and strip away what little progress has been made in humanistic and holistic care of individuals in emotional distress. 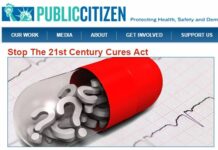 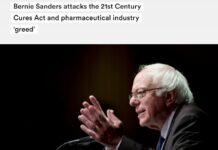