From American Civil Liberties Union: Last week, the defense attorneys of the psychologists behind the CIA’s torture program, James Mitchell and John “Bruce” Jessen, compared their clients to the contractors who supplied Nazi Germany with the poison gas used at Auschwitz and other concentration camps.

“A key part of Mitchell and Jessen’s argument hinges on the claim that poison gas manufacturers weren’t held responsible by a British military tribunal for providing the Nazis with the gas because the Nazi government, not contractors, had final say on whether to use it. They argue that they are like a corporate gassing technician who was charged with and acquitted of assisting the Nazis because ‘even if [Mitchell and Jessen] played an integral part of the supply and use of’ torture methods, they had no ‘influence’ over the CIA’s decision to use them and can’t be accountable.

In fact, the Nuremberg tribunals that judged the Nazis and their enablers after World War II established the opposite rule: Private contractors are accountable when they choose to provide unlawful means for and profit from war crimes. In the same case that Mitchell and Jessen cite, the military tribunal found the owner of a chemical company that sold Zyklon B to the Nazis guilty — even though only the Nazis had final say on which prisoners would be gassed.” 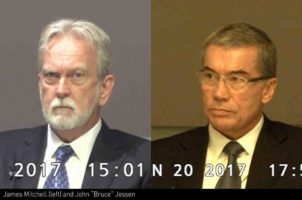