“Reflecting on Fernyhough’s book, Jerome Groopman notes that in the early parts of the Bible, the voice of God gave direct commands to Adam, Abraham, and Noah. It spoke to Moses through the Burning Bush, going by the Book of Esther, making itself known again to the apostle Paul in the New Testament. Socrates, who wrote nothing down, heard a ‘sign’ from childhood. The voices of three saints guided Joan of Arc as she rebelled against the English. Groopman cites Martin Luther King, Jr.’s autobiography, in which he describes ‘the quiet assurance of an inner voice’ telling him to ‘stand up for righteousness.’

The social context in which these people lived can impact how they’re seen. It’s impossible to say how the prophet Ezekiel was understood within his cultural moment. But in most places today, if a person claimed—as Ezekiel does—that he ate a scroll because the Lord commanded him to do so, some eyebrows might be raised. In a community where a personal, verbal relationship with God is normal, the reception may be different.” 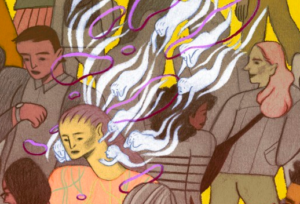