In this piece for Revolutionary Socialism in the 21st Century, Hazel Croft argues for a more radical approach to mental health, exploring the impact of neoliberal capitalism on biological psychiatry and the pathologization of everyday life. She proposes a social framework that explains how mental distress is inseparable from structural and societal factors including racism, sexism, homophobia, transphobia, and economic inequality.

“Although written before the full effects of neoliberal policies on psychiatric practice and diagnosis, the work of Marxist writer Peter Sedgwick provides a useful social framework to explore mental health under neoliberal capitalism. In his 1982 book Psychopolitics, and in several articles written in the 1970s, Sedgwick conceptualised mental illness as being both real and constructed. His book was a critique of anti-psychiatrists, such as RD Laing and Thomas Szasz, who had argued that psychiatry was a tool of oppression. Sedgwick agreed that psychiatric diagnosis and treatment were not value-neutral but were laden with judgements about what was considered ‘normal’ behaviour. But physical illnesses were also socially constructed, Sedgwick argued. Most anti-psychiatrist thinkers had an individualist critique of psychiatry, which construed the problem as one of the behaviour of psychiatrists. But for Sedgwick, psychiatry could not be viewed as a battle between the oppressive psychiatrist and the patient labelled as mentally ill. It was necessary, he argued, to look at the wider social context in which mental illness developed and psychiatric diagnosis took place. Mental health was part of a social process, and linked to wider social and political interests and struggles.

Such a social framework provides a way in which we can connect an individual’s psychological feelings to the relationships and structures of society. In this way, we can begin to focus on the question of what has happened to us in our lives, rather than to focusing on what is wrong with us. Mental health is not disconnected from wider social relationships of exploitation and oppression, but is enmeshed in them. We can see this in the way that mental health, and its treatment, is gendered and racialized. Women, people from ethnic minorities and those who are LGBTQ are all more likely to suffer symptoms of mental distress and to face mental health problems. A recent study, for example, found that people from ethnic minorities in Britain were five times more likely to suffer from psychotic disorders, with first-generation migrants who arrived in Britain as children most at risk. The researchers identified factors such as racist discrimination, a sense of belonging, perceived threats and the conflicting demands of living in a new country as factors in the development of psychotic episodes.” 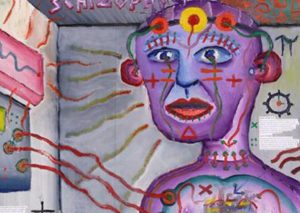