From Pacific Standard: In an effort to protect homeless individuals from the effects of Hurricane Irma, officials from the Miami-Dade County Homeless Trust used the Baker Act to involuntarily commit any homeless people who would not voluntarily seek shelter. This policy has set a dangerous precedent for locking homeless people up without due process; several advocacy organizations including NARPA and the Bazelon Center have spoken out against it.

“Friedman is concerned about homeless people in Miami. But he also knows that the risks don’t come only from the storm. ‘It’s scary,’ he says, ‘when people make decisions that others don’t like, they define it as crazy. In this case, they lock them up without any due process.’ He wonders, now that this precedent has been set, what other moments will justify trawling the streets of Miami to ‘Baker-Act’ homeless residents.

In the end, officials at the Homeless Trust told me, six people were committed. It’s not a huge number, but each of these individuals has rights, and in each case those rights were violated. Those violations could be been prevented with better planning. Advocates worry about the potential for similar misuse of involuntary commitment, especially given that none of the widespread news coverage of the Baker Act reached out to experts like NARPA, Next Steps, or the Bazelon Center.” 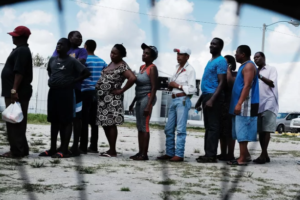 Police Killings and the Pseudoscience of “Excited Delirium”