From The New York Times: President Trump has nominated Alex M. Azar II, a former president of the American division of Eli Lilly, to be secretary of health and human services, which has responsibility for regulating the pharmaceutical industry.

“Mr. Trump’s choice of Mr. Azar continues a pattern in which the president has put former industry officials in charge of regulating their former colleagues. At the Department of Health and Human Services, it would fall to Mr. Azar to follow through on the president’s threats to confront drug prices, many of which are manufactured by Mr. Azar’s former company.

Eli Lilly, where Mr. Azar worked for almost a decade, is one of three manufacturers of insulin whose prices have skyrocketed in recent years. The price increases by the three drug makers — Lilly, Novo Nordisk and Sanofi — have happened in near lock step and prompted outcries from patient groups. This year, a lawsuit filed by patients accused the companies of fixing prices.” 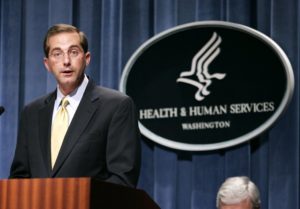