From The Atlantic: According to author Dan Buettner, who studies the healthiest people in the world, improving our surrounding environment has a much greater impact on our personal happiness and well-being than self-improvement efforts or positive psychology techniques.

“In the United States, the happiest places tend to be places where enlightened leaders over the past century decided to shift their focus away from just economic development and growth to quality of life. They made policies and emphasized a better life over a better business environment.

A great example of that is San Luis Obispo. In the 1970s, a mayor came in who was an architecture professor from [California Polytechnic State University]. He noticed a forest of signs downtown, and drive-through fast-food restaurants, and the highway coming through. He drove a push for aesthetics, social gathering places, and streets built for humans, not just cars. Today, San Luis Obispo routinely ranks in the top 10 happiest places in the country. It’s not a coincidence. You see the same features in Portland, Santa Cruz, Boulder—happiness is not a coincidence. There’s always an orchestration of common factors that come together to produce it.” 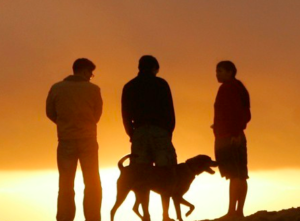