From Forbes: Increasing evidence shows that smartphones can be addictive, and that smartphone addiction can have a very negative impact on our mental health, especially in adolescents and young people.

“But the reality, especially for younger people, is that phone use, especially heavy use, isn’t so lighthearted. A study last month looked at the rise in depression and suicide in teenagers in recent years. The CDC had noted a rise in the rates of both over the years 2010-2015, and found that girls were particularly at risk: Their suicide rate rose by 65% in those five years. The number of girls with severe depression rose by 58%.

The authors of the new study wanted to see what might be causing these disturbing trends. Though it’s only a correlation, the team found a tight relationship between mental health issues and a rise in ‘new media screen activities.’ About 48% of those who spent five or more hours a day on their phones—a lot of time by any measure—had thought about suicide or made plans for it, vs. 28% of those who spent only one hour per day on their phones. No other variables—like household financial issues, homework, or school pressure—could account for the rise in mental health issues over that time.” 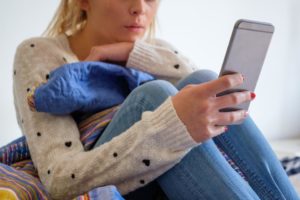