“Well, that classic notion of anonymity and neutrality has been enormously excavated and thought about in recent years. I think to be anonymous and neutral really are unreal expectations of how a psychoanalytic process works. There are two people in the room. There are roles. There’s a frame. There is a setting. There are all kinds of procedures. But within it, there are two people, each one with an unconscious. And so, how these unconsciouses are interwoven is very complicated. I doubt that neutrality is very often what one feels doing clinical work. You are trying to be reflective. So what you can and must be is to be reflective, thoughtful. It doesn’t mean you act out as an analyst. It doesn’t mean that you tell your patients everything about yourself. But it’s unlikely that you’re exactly anonymous. After all, your office is somewhere, in some city. And that office is likely to be already signified by class, by neighborhood, how it’s furnished. So the materiality of the office already undermines anonymity and neutrality. In this way I’m a Ferenczian and Ferenczi talked about psychoanalysis as the dialogue of two unconciousnesses. The analyst is there to frame and be responsible for the setting and to listen. But listening is unlikely to be neutral in the sense of indifferent. So that you can be a very careful analyst, you can be thoughtful, you can try to give the patient endless space to talk and to manifest things. You can do the work of analysis. But I don’t think that anonymity and neutrality are very adequate descriptions of the complexity of the analytic process. So it’s not that you proselytize and do your politics in the clinical situation. But it’s unlikely that your politics is completely absent from the situation. It is unlikely that analyst would be neutral in the sense that they would think nothing about issues like gender.

Psychoanalysts have feelings about gender and sexuality, different forms of sexuality etc. So we have to figure out a better word than ‘neutrality’ for creating an atmosphere in which it can be possible to think things that are usually unthinkable. Whether they’re about identity or about political life or about meaning or about cruelty. So, I think the task of the analyst is to create an environment in which things that are often unspeakable and unthinkable can be thought and spoken. So you have to create freedom in the room. If you’re too invasive as the analyst, you will spoil it. If you’re too far away, you may not be able to produce an atmosphere in which the patient feels safe. So, I would guess for me a more important word than ‘neutrality’ and ‘anonymity’ would be ‘safety’. Not too safe because both the analyst and the patient have to be able to be free to say things that are dangerous. But the analyst’s job is to be responsible for this setting and to create conditions of safety. I think it’s true that analysts are turning to the political sphere and attempting to create an analysis in which it might be safe to think about what is happening in the world. As well as what is happening in a clinical situation, in the patient’s mind or life. Even though being an analyst and being an activist are two different practices, there are still practices of one and the same person.” 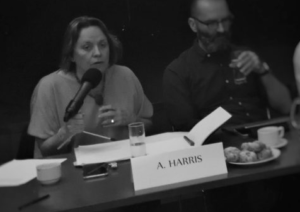