In this piece for Nautilus, Michael S. Gazzaniga explores William James’ conceptualization of consciousness as an instinct, emphasizing the compatibility of this paradim with James’ belief in free will and human agency.

“James provides much more, and it does take time to absorb the idea of instincts. I urge you to read his original paper to see his clear thinking, clear writing, and unshakable pragmatism on these difficult issues. James points the way forward, refusing to accept the despairing caricature of humankind as robot at the beck and call of reflex responses. To him, a complex behavioral state can be produced by varying the combinations of simple, independent modules, just as a combination of multiple different small movements makes the complex behavior of a pole vaulter as he sails upward over the pole. When acting together in a coordinated way, even simple systems can make observers believe other forces exist.

James’s stance is clearly stated: ‘My first act of free will shall be to believe in free will.’ This proclamation is consistent with the idea that beliefs, ideas, and thoughts can be part of the mental system. The symbolic representations within this system, with all their flexibility and arbitrariness, are very much tied to the physical mechanisms of the brain. Ideas do have consequences, even in the physically constrained brain. No despair called for: mental states can influence physical action in the top-down way!” 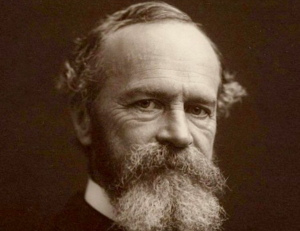