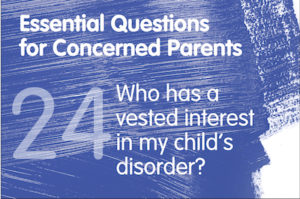 If you are merely in despair, they have no way to make a profit from you. If that despair is given the medical-sounding name clinical depression, then they can provide a medical-seeming pill called an antidepressant. These medical-seeming pills may indeed have an effect on you, either a placebo effect, some other positive effect, or a negative effect. Pharmaceutical companies have a large and natural vested interest in selling these chemicals, as they are profitable and because the model—that mental disorders can be created by professionals sitting around a table—assures mental disorder growth and future sales.

However, pharmaceutical companies aren’t the only ones with a vested interest in the mental disorder paradigm. Universities and university researchers need it, because it is an avenue to research dollars. Mental health professionals need it, because it bolsters their prestige, makes them look like experts, and provides a rationale for what they do. The courts need it, as a way to provide some distinctions between who is in their right mind and who isn’t. Society needs it, as a mechanism for controlling unruly and unwanted public behaviors. Schools need it, for the same reasons. This web of need extends far and wide and includes more folks than you might suppose. It even includes your friends, neighbors, and loved ones, who have their own vested interest in believing in a model that looks and smells like medicine. Most people are invested in their culture’s dominant paradigms and tend to believe them unquestioningly. So, who has a vested interest in your child’s mental disorder? Just about everyone.

Interview: How Parents Can Help Their Children Without Psychiatric Meds