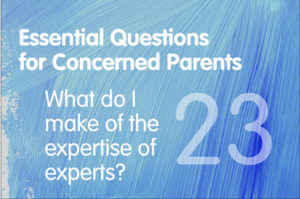 So-called mental disorders are not “diagnosed” based on causes that can be tested for (or even articulated) but are instead “diagnosed” according to what are called symptom pictures. This is a highly questionable practice.

You may be thinking, “Well, maybe the system is flawed, but surely psychiatrists, psychologists, family therapists and other mental health professionals know what to do with these symptom pictures. Maybe it isn’t exactly science but maybe it is an art, where, through practice, mental health professionals begin to discern the difference between a mental disorder and a life challenge. So, even though the system is flawed, no doubt practitioners do know important things about mental disorders.” You would be mistaken in that belief and that puts you in a very difficult position. If you can’t really trust the basic premises of psychiatry, what are you supposed to do? No one has perfect or even very good answers. But at least there are many things that you might try, from educating yourself about the pros and cons of so-called psychiatric medication to improving your parenting skills and reducing family stress to exploring alternative resources like peer counseling, mentoring, play therapy, and talk therapy. It is very hard on you that you can’t really trust mental health providers to know what they are doing, to have a solid rationale for what they are doing, or to be making claims based on solid science. Still you must persevere, even if no one you encounter is really the expert he or she claims to be.

You, Your Kids, or the Doctor… Who’s Running the Show?