From Advances in the History of Psychology: A new book, State of Madness: Psychiatry, Literature, and Dissent After Stalin by Rebecca Reich, explores the role of psychiatric discourse and rhetoric in the years after Joseph Stalin’s death.

“State of Madness examines the politically fraught collision between psychiatric and literary discourses in the years after Joseph Stalin’s death. State psychiatrists deployed set narratives of mental illness to pathologize dissenting politics and art. Dissidents such as Aleksandr Vol’pin, Vladimir Bukovskii, and Semen Gluzman responded by highlighting a pernicious overlap between those narratives and their life stories. The state, they suggested in their own psychiatrically themed texts, had crafted an idealized view of reality that itself resembled a pathological work of art. In their unsanctioned poetry and prose, the writers Joseph Brodsky, Andrei Siniavskii, and Venedikt Erofeev similarly engaged with psychiatric discourse to probe where creativity ended and insanity began. Together, these dissenters cast themselves as psychiatrists to a sick society.” 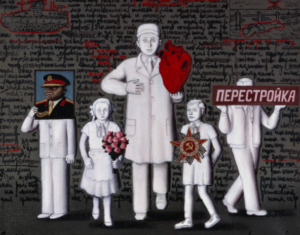 A Cultural History of Extraordinary Bodies