From Harper’s Magazine: People who hear positive, encouraging voices often seen as spiritual guides or messages and people diagnosed with schizophrenia are usually thought of as two completely distinct groups. However, several prominent European scientists argue that all auditory hallucinations exist on what they call the psychotic continuum; it is people’s responses to their voices, not the presence of voices themselves, that influence psychological well-being and functioning.

“And yet one of the new ideas in psychiatric research is that these two seemingly distinct types of voice hearing might be related. A group of highly respected, mostly European scientists—among them Jim van Os in Maastricht, the Netherlands, and Charles Fernyhough in Durham, England—have started to argue for the maverick idea that all auditory hallucinations exist on what they call the psychotic continuum. In other words, voices heard by healthy people are simply less severe manifestations of those heard by the mentally ill. These scientists suggest that hearing voices is like experiencing sadness. Some people are clearly sadder than others, and terrible sadness may require hospital care. But there is nothing inherently abnormal about sadness itself. Van Os, Fernyhough, and others have started to ask whether healthy people who hear voices frequently, like Sarah, somehow learned early on to manage their unusual perceptions and so never spiraled into mental illness. They believe that the voices of madness could be softened, if we could only teach people to harness them.” 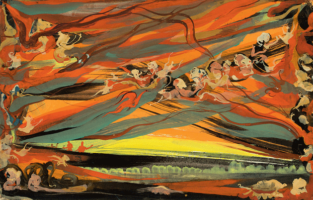