From ProPublica: “Emotional distress and mental health issues are prevalent among these children, sometimes a result of traumatic experiences in their home countries, at other times triggered by being separated from parents at the border, or by fear that they will never be released from ORR facilities. Former shelter employees, and doctors and lawyers working for advocacy groups say the shelters lack sufficient counselors and too often turn to powerful psychotropic drugs when kids act out.

Under most states’ laws, before a child is medicated, a parent, guardian, or authority acting in the place of the parent—such as a court-appointed guardian ad litem—must be consulted and give informed consent. But in these shelters, the children are alone. Shelter staff may not know the whereabouts of the parents or relatives, and even when that information is available, advocates say that the shelters often don’t get in touch. Nor do they seek court approval. Instead, they act unilaterally, imposing psychotropic drugs on children who don’t know what they’re taking or what its effects may be.” 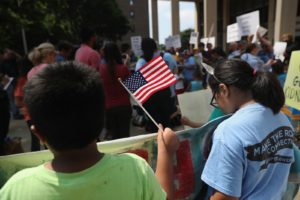