From the New York Post: “‘Three Identical Strangers’ chronicles a story so wild that, as Shafran says in the film, ‘I wouldn’t believe [it] if someone else was telling it.’ And once the long-lost siblings found each other, their story became even more shocking as they discovered they had been part of a decades-long psychological experiment that had controlled their destiny.

The triplets were born to a teenage girl on July 12, 1961, at Hillside Hospital in Glen Oaks, NY. Split up at 6 months by the now-defunct Manhattan adoption agency Louise Wise Services, the boys were raised within 100 miles of each other. None of the adoptive parents knew of the other brothers.

Before the babies were placed in their adoptive homes, the agency had told the prospective parents that the children were part of a ‘routine childhood-development study.’ The parents say it was strongly implied that participation in the study would increase their chances of being able to adopt the boys.” 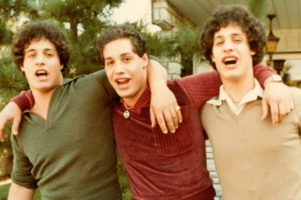