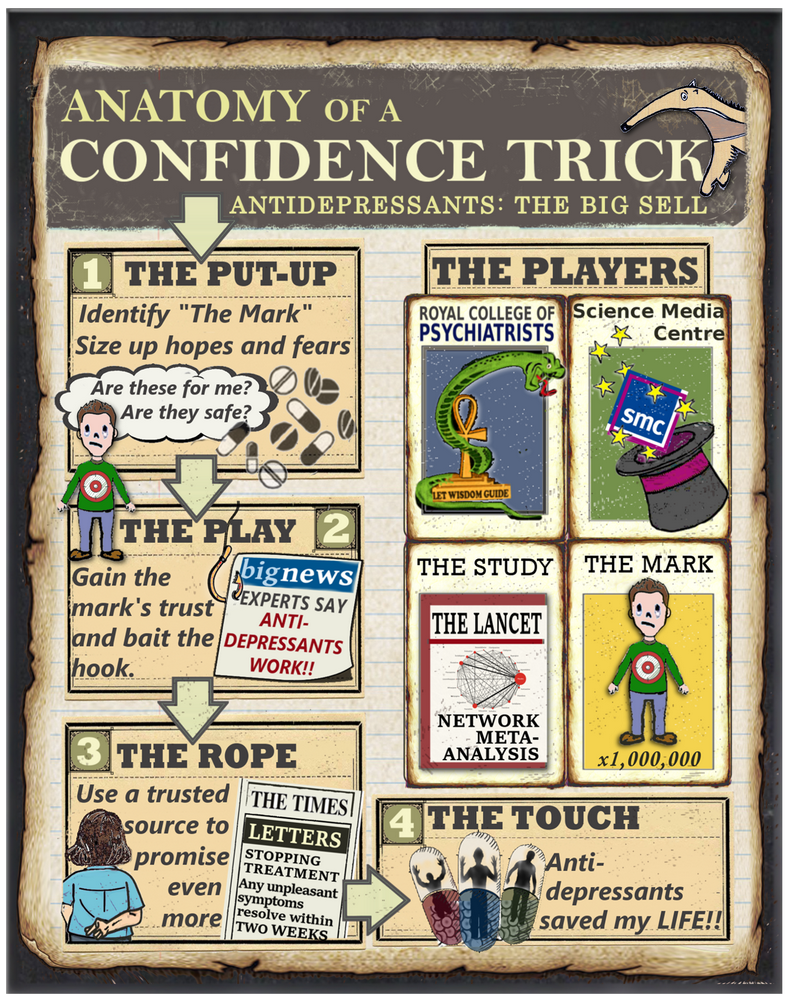 This cartoon is my take on the ruckus surrounding the Cipriani et al study published by The Lancet in February. Much has been written and said about the whole affair, I became bleary- eyed keeping up with it all. Needless to say, a swarm of ideas and images invaded my mind, and refused to settle or leave me be. I wanted to find an amusing angle for this cartoon and, in fact, my first response was bitter laughter at the sheer audacity of such a blatant PR spin-job. In the UK, we were treated to a blitz of the airwaves by several lead psychiatrists from the Royal College of Psychiatrists, all pumped up and dutifully on message: “Antidepressants work, and depresion is under-treated.”  The affair gathered pace and strength on blogs and social media, it is still rumbling around, and is likely to do so for quite some time. Far from “putting the controversy to bed”, as the RCPsych hoped, they have stirred up an almighty stink.

In the end, the inspiration for this cartoon came from a book by Maria Konnikova – The Confidence Game: The Psychology of the con and why we fall for it every time. For many hours I listened, entranced, to the audiobook version, and was so captivated by the gentle sound of her voice that I listened to it all again a few weeks later. Several concepts from the book stayed with me, but the one that made the biggest impression was this:

“Con artists, at their best and worst, give us meaning. We fall for them because it would make our lives better if the reality they proposed were indeed true.”

A simple magic pill to make it all better? How tempting! Sounds like a con, but surely all those top-dog eminent professors can’t be wrong… can they?