From Us Weekly: “Dunham was first prescribed [Klonopin] to treat her anxiety disorder. ‘I was diagnosed with pretty serious PTSD. I have a few sexual traumas in my past, and then I had all these surgeries, and then I had my hysterectomy after a period of really extreme pain,’ she said. ‘It stopped feeling like I had panic attacks and it started feeling like I was a living panic attack.’

Eventually, however, the actress began taking more and more pills. ‘It stopped being “I take one when I fly,” to “I take one when I’m awake.”‘ Medical professionals, she explained, were more than willing to prescribe the drug. ‘I didn’t have any trouble getting a doctor to tell me, “No, you have serious anxiety issues, you should be taking this. This is how you should be existing,”‘ she said.

Looking back, she noted, ‘there were a solid three years where I was, to put it lightly, misusing benzos, even though it was all quote unquote doctor-prescribed.’ And breaking the addiction was more difficult than she thought it would be. ‘Nobody I know who is prescribed these medications is told, “By the way, when you try and get off this, it’s going to be like the most hellacious acid trip you’ve ever had where you’re f–ing clutching the walls, and the hair is blowing off your head and you can’t believe you found yourself in this situation,”‘ she said. ‘Now the literal smell of the inside of pill bottles makes me want to throw up.'” 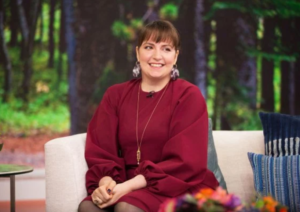