Why did it take two psychologists – John Read and James Davies – to carry out this research?

Where are the prescribers of these SSRI antidepressant substances – psychiatrists and GPs – doctors who have reassured the public for decades that there are no significant withdrawal problems associated with these substances?

Why have the enthusiastic prescribers of these substances – psychiatrists and GPs – who have continually informed the public that there is no need to worry about withdrawal problems, not carried out research such as this decades ago, before these drugs were unleashed upon an unsuspecting and trusting international public?

Why are the prescribers not on top of this issue, taking the lead – as any responsible profession would – in relation to the substances they prescribe so widely?

Why do the prescribers seem to want to know little or nothing about the major issue of prescribed drug dependence, as evidenced by the underwhelming response of the Royal College of Psychiatrists and the American Psychiatric Association to this important new research?

Mainstream psychiatry’s refusal to take such findings seriously and address the issues that arise inevitably leaves the vast numbers of people who experience severe antidepressant withdrawal problems alone, unsupported, virtual outcasts, leaving these people with little option but to support each other as best they can, through internet and other groups.

This is yet another scandal.” 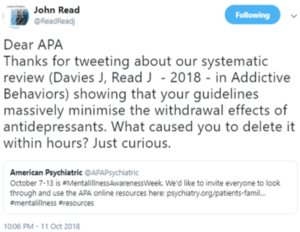