From AP News: “Thousands of foster children may be getting powerful psychiatric drugs prescribed to them without basic safeguards, says a federal watchdog agency that found a failure to care for youngsters whose lives have already been disrupted.

A report released Monday by the Health and Human Services inspector general’s office found that about 1 in 3 foster kids from a sample of states were prescribed psychiatric drugs without treatment plans or follow-up, standard steps in sound medical care.

The inspector general scrutinized a sample of 125 cases from each of five states with the highest overall percentages of foster children treated with psychiatric drugs. Those states were Iowa, Maine, New Hampshire, North Dakota and Virginia. The cases covered the period from October 2014 through March 2015. Investigators looked at each state’s compliance with its own particular requirements for treatment planning and follow-up.

Maxwell said the finding that 34 percent of children did not have either treatment plans or follow-up monitoring translates to about 4,500 children in the five states examined. She said the national number would certainly be higher but the design of the inspector general’s review did not allow for a simple extrapolation. Even among the five states cited there were wide differences.” 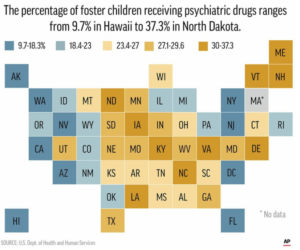