JAMA Psychiatry recently published both an original investigation, from Mark Wade and colleagues, as well as an editorial, from Jonathan Schaefer, on the Bucharest Early Intervention Project (BEIP). The BEIP is the only existent randomized clinical trial comparing early foster care to institutional care. The results suggest that children randomly assigned to foster care had lower rates of internalizing problems as compared to children who were assigned to institutional care at 54 months, as well as lower rates of externalizing problems eight years later.

“Therefore,” the authors write, “it is conceivable that institutional rearing engenders broad deficits in emotion dysregulation, which increase vulnerability to multiple psychiatric problems, but that early placement into socially enriching environments enhances the regulatory competencies that mitigate risk for later psychopathology.”

Children who are raised in institutions are potentially exposed to psychosocial neglect, due to high ratios of children to caregivers, high turnover in caregivers, isolation, and regimentation of children, as well as inadequate social and cognitive stimulation. These effects may be mitigated by placement in early foster care. Little is known about the psychological trajectory of institutionalized children, in part because most studies of such a population are limited to observational design and, accordantly, to investigating observable, measurable factors. The BEIP, meanwhile, examined children who were abandoned in Bucharest, randomizing half the sample to receive high-quality, early foster care, with the other half receiving care as usual in an institutional setting, while the third group of children who had never been institutionalized served as a control. The design provides a unique insight, as Schaefer notes:

“… children who received ‘care as usual’ were also exposed to relatively severe early deprivation and neglect. The BEIP can be thus be viewed not only as a randomized clinical trial that assessed the efficacy of foster care as an intervention for institutionalized young children, but also as a randomized clinical trial that allows investigators to isolate the causal effects of severe early-life deprivation on later outcomes.”

“The present results add to this growing literature by providing the first evidence to date that profound psychosocial deprivation as a function of early institutionalization increases transdiagnostic liability to psychopathology from childhood through adolescence,” write Wade and colleagues. “Moreover, these effects appear to be at least partially amenable to foster care intervention, suggesting that, whatever [general psychopathology] is indexing, it is not immutable.”

Despite the novel design, the authors note several limitations to this study: 1) Measures of psychopathology relied on teacher/caregiver ratings, 2) there was missing data over the course of the study, 3) the sample of 136 was rather small, 4) the bifactor models used to analyze internalizing and externalizing symptoms obfuscates their interpretation and 5) there is a potential lack of generalizability given the unique population at hand.

“The analysis of Wade and colleagues convincingly illustrates how a period of profound early deprivation can have lasting and widespread consequences on later emotional and behavioral functioning. These results affirm the importance of early interventions for institutionalized children and suggest the hypothesis—testable in future research—that interventions for children exposed to less pervasive early adversity may yield similar benefits.”

Schaefer JD. Use of Hierarchical Measures of Psychopathology to Capture the Long (and Wide) Shadow of Early Deprivation in the Bucharest Early Intervention Project Analysis. JAMA Psychiatry. 2018;75(11):1101–1102. doi:10.1001/jamapsychiatry.2018.2215 (Link) 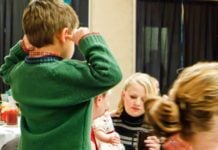