From The Marshall Project: “The statement noted that Taylor had resided on a cellblock for inmates with ‘behavioral issues.’ But that was the only official nod to the underlying circumstances of his death—that this fatal collision between the keepers and the kept involved one of the many people with a tortured mind who wash up on the shores of America’s prisons, institutions supremely ill-equipped to handle them. Nor did any authority state the obvious: that absent the presence of a deadly weapon—in this case, a long wooden stick—and but for a guard’s stubborn insistence that even a mentally ill inmate must clean his cell, this was an avoidable tragedy.

At the time of his death, Taylor was one of nearly 10,000 people in New York’s state correctional facilities diagnosed with a mental illness—one out of every five prisoners. Roughly half are, like Taylor, considered ‘seriously mentally ill,’ suffering from schizophrenia or another psychotic disorder. They are men and women who have trouble coping with daily living needs, often unable to follow orders in a setting where a military-style strictness governs every movement. In New York, the number of inmates with mental-health issues has risen even as the overall number of people held in the state’s prisons has fallen, from a high of 72,000 in 1999 to some 48,000 currently held in the state’s 54 correctional facilities. And New York is not alone. ‘It is almost everywhere,’ Roth says. ‘Even as the number of prisoners goes down, the number of people incarcerated with mental illness goes up.’ […]

Ramsay-Nobles said she’s glad the lawsuit has provided some answers about her brother’s death, as troubling as those answers are. ‘It’s made me wonder, what about the others like him in prison?’ she told me recently. ‘The ones we don’t hear about?'” 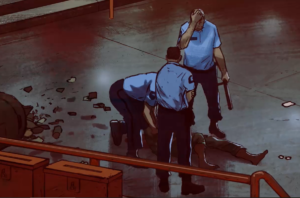