From The Independent: “Despite research linking it to everything from breast cancer and blood clots to low libido and weight gain, [the contraceptive pill] remains the most popular form of contraception for women today and is taken by more than 100 million women worldwide.

But countless studies have identified strong links between taking the pill and poor mental health, and a new BBC Two documentary sheds light on the severity of the problem, revealing how it’s left some women suffering from depression and experiencing suicidal thoughts. […]

Studies have linked the hormone [progesterone] to depression, anxiety and low mood, but researchers have yet to find an ethical way to prove cause and effect because this would involve distributing placebo pills to study subjects, which could lead to unwanted pregnancies, the moral complexities of which are obvious.

A survey conducted by the team behind the documentary, titled The Contraceptive Pill: How Safe Is It?, found that one in four women taking the pill said it had negatively affected their mental health.

Danielle, 31, is one of these women. Speaking in the Horizon episode, she recalls how her side effects were ‘completely debilitating and terrifying,’ adding that she’d never experienced poor mental health prior to taking the pill.

‘I went from being fine to having suicidal thoughts within six months,’ she adds.” 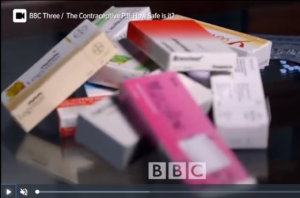