“Given the potential adverse outcomes associated with their use—particularly in combination with opioids—it is important to consider whether this variation in BZD [benzodiazepine] prescribing may be contributing to the uneven distribution of gains in or even worsening of life expectancy in counties across the USA,” state the researchers. 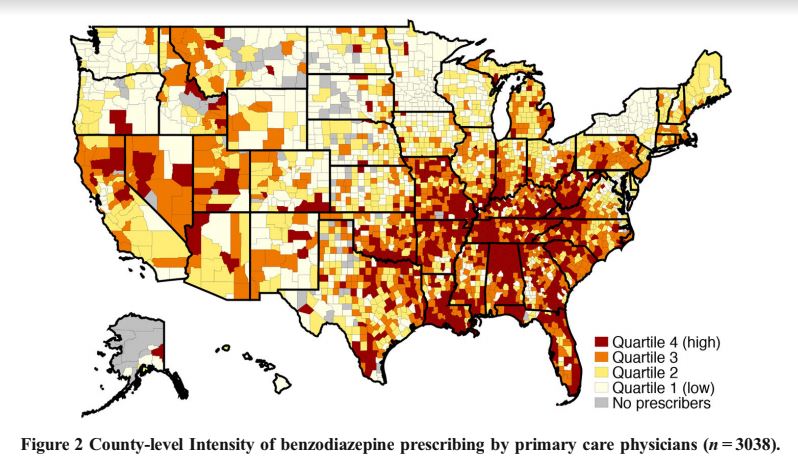 Benzodiazepines can impair cognition and increase the risk of falls in older adults. The authors note, “the extent of BZD prescribing is high given the availability of safer, guideline-recommended treatments like selective serotonin reuptake inhibitors and cognitive behavioral therapy.” Only 5.6% of people prescribed benzodiazepines receive their prescription from psychiatrists, meaning the vast majority are prescribed in primary care. This is especially true for older adults as psychiatrists are less likely to accept Medicare compared to other specialties. The researchers discuss that benzodiazepine prescribing is usually done without a clear mental health diagnosis, and seek to understand how the geographic region or prescriber characteristics may affect benzodiazepine prescription practices.

“If mental health disorders are not fully driving BZD prescribing, more extensive BZD prescribing in socioeconomically distressed counties might suggest that this distress—rather than a clinical indication such as panic disorder—is driving potentially inappropriate prescribing,” state the authors.

Results show, “Medicare Part D beneficiaries were dispensed over US$374 million worth and 1.2 billion total days of BZDs, which comprised 2.3% of all Part D medication days.” PCPs were responsible for 62% of all benzodiazepine prescriptions. States with the highest county-level prescribing practices were Louisiana, Florida, West Virginia, Tennessee, and Alabama.

Higher intensity counties were more rural and had fewer primary care providers and psychiatrists per capita. Counties in New York state had some of the lowest intensity prescribing practices for benzodiazepines, with all but three counties being in the lower quartile (i.e., the bottom 25% of counties). The authors highlight that New York initiated a strict benzodiazepine prescription policy 30 years ago, and suggest this policy explains the lower-intensity prescribing.

“In the final model, several other concerning county-level health status characteristics were associated with high-intensity BZD prescribing, including more days of poor mental health, a higher proportion of disability-eligible Medicare beneficiaries, and a higher suicide rate,” write the researchers.

The results are in line with previous research from Maust’s research team finding non-clinical factors contribute to long-term benzodiazepine use. The authors conclude,

“Because a large amount of BZD prescribing occurs without a mental health or insomnia diagnosis, our findings fit Case and Deaton’s hypothesis, with prescribing potentially in response to distress in socioeconomically disadvantaged counties.”